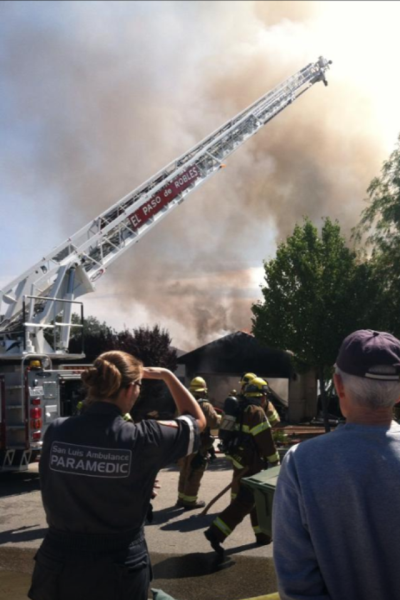 This photo was submitted by a reader this morning. 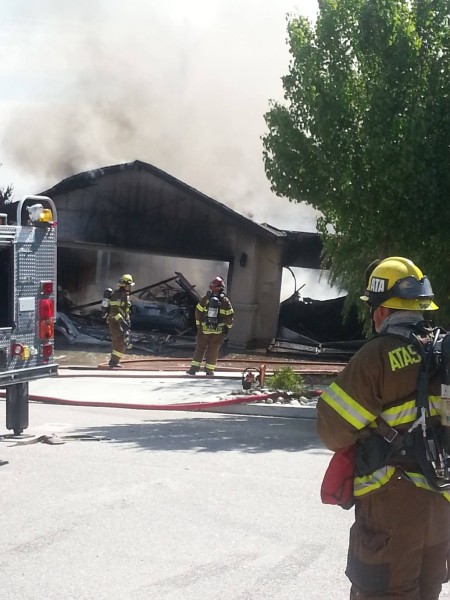 Paso Robles firefighters responded Thursday morning to a house fire in a neighborhood near Union and Golden Hill roads. It’s in the Bella Vista area. Smoke could be seen rising from the neighborhood on the northeast side of town at around 10 a.m. in the 2300 block of Signora Rosa Court. An ambulance crew responded as well, but officials say there were no injuries. A large firetruck with a tall crane could be seen spraying water down on the flames.

Two companies of Paso Robles Firefighters and one Battalion Chief responded at 9:47 a.m. to the residential structure fire at 2304 Signora Rosa Street in Paso Robles. Firefighters arriving at scene found a single story, single family residence with the garage and attic well involved in fire. First arriving firefighters aggressively stretched hose lines through the front door of the structure in an attempt to contain the fire to the garage and attic. Simultaneously, Firefighters on the roof cut several vertical ventilation holes to release trapped heat and products of combustion. Unfortunately the volume of fire and rate of burning required Firefighters to retreat to a defensive position at 10:17 a.m; the fire was contained utilizing exterior hose lines and the elevated ladder pipe at 10:40 a.m.

Investigators are working now to  determine the cause of the fire. A woman and her son were home at the time and heard a noise in the garage, according to a KSBY news report. When they went to check it out, he says that is when they found the fire, the report said. They were  able to exit the house and call 911. The fire spread to the garage attic before spreading into the home. A reporter on scene says the home appears to be badly damaged.

You can help the family

The Parent Teacher Association at Georgia Brown Elementary School in Paso Robles is trying to help the displaced homeowner, Karen Grandoli and her son. Grandoli is a third grade teacher at the elementary school. “I am very sad to report that Sra. Grandoli’s home burned this morning,” says PTA president Tracy Cagliero in an email. “She and her son Owen were home at the time and were able to escape safely with their dog. In just a short amount of time from loving family and friends, Karen and her family have located a temporary home to stay in.”

Many families are asking how they can help, says  Cagliero. “MMC Lending at 502 1st Street, Paso Robles is accepting donations of gift cards for Karen and her family. Donations for restaurants, clothing stores or other stores are more than welcome to help Karen through this transition and to help them establish their home again.”

Financial contributions can also be made at Mission Community Bank in the name of the Grandoli Family Fund.

“We are very thankful that they are all safe,” she says. “Please keep this family in your thoughts and prayers.”