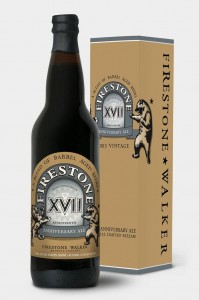 During the dog days of the autumn grape harvest, thirsty overworked winemakers are fond of saying, “It takes a lot of beer to make great wine.” But at Firestone Walker Brewing Company, the opposite is also true, as 14 local winemakers recently convened to help the brewing team blend the next Firestone Walker Anniversary Ale.

The result is “XVII”—a vintage blend of seven eclectic component ales aged in retired bourbon, brandy and whiskey barrels. XVII will be officially released starting at the brewery on November 2. The blending session has become an annual rite at the brewery, with Brewmaster Matt Brynildson enlisting his winemaker friends from the surrounding Paso Robles wine country.

“I’m not aware of any other beer that is blended like this, from so many distinct components,” Brynildson said. “That’s why we bring in the winemakers.”

During the blending session, the friendly chatter turns to smack talk as the winemakers are divided into competing pairs. Each pair is tasked with assembling their best blend. The different proposed blends are then blind tasted by the entire group, and votes are cast for the winning blend.

This year, Neil Collins and Chelsea Franchi of Tablas Creek Winery unseated repeat winners (for 2011 and 2012) Justin Smith and Mark Adams of Saxum Winery for the coveted cardboard crown awarded each year to the winning pair.

“All of our participating winemakers are practicing experts in the art of blending,” Brynildson said. “Their input is invaluable, as this project is all about creating cohesion and complexity from an array of diverse beers. The result is a masterful blend, the sum being greater than the parts.”

XVII is the eighth release in Firestone Walker’s anniversary series, dating back to the release of the inaugural anniversary release called “Ten” in 2006. Over the ensuing years, Firestone Walker has developed one of the craft beer industry’s most extensive barrel aging programs, spanning upwards of 1,500 barrels. Brewing beer with oak barrels has been a pioneering focal point for the brewery since its founding in 1996.

XVII will be officially released at the XVII Anniversary Party at the brewery in Paso Robles on November 2 from 11 a.m. to 2 p.m. The festivities will include samples and live music. Space is limited; guests are encouraged to arrive early. Thereafter, XVII will be available in select markets across the United States. The suggested retail price is $23.99 for an individually boxed 22-ounce bottle.

Bravo / Aged in Bourbon and Brandy Barrels / 30% of Final Blend

Helldorado / Aged in Bourbon and Brandy Barrels / 4% of Final Blend

“The lead beers of the blend are Bravo, an oak-forward imperial brown ale and Sticky Monkey, a huge brown sugar-infused barley wine. These beers are beautiful on their own but together they bring rich molasses drenched oak flavors and cinnamon glazed almond aromas lifted by high alcohol. In the middle of the blend are our two favorite stouts, Parabola and Velvet Merkin, working in concert to provide a dusty cocoa mocha aroma and bitter dark chocolate flavors. Somehow together in this blend I am reminded of Bourbon-soaked chocolate chip cookie dough! Double DBA makes the blend again this year, bringing its signature vanilla-infused crème brulée flavor. Helldorado, our blonde barley wine, helps to bring balance with its honey notes and light leather nuances. Like last year, a dash of Wookey Jack made the cut bringing with it some fresh hop notes derived from bold Citra and Amarillo creating even more interesting complexity. Altogetherl I find XVII to be full of soft chocolate and warm spice perfectly balanced by toasted coconut bourbon barrel notes and smooth creamy malt mellowness.”

“These are my friends and brothers in fermentation science, and practicing experts in the art of blending.” – Brewmaster Matt Brynildson