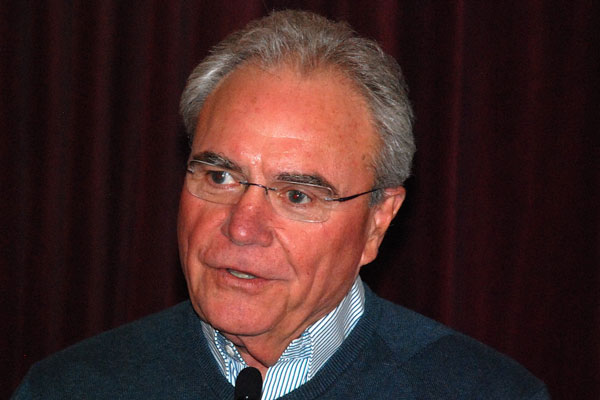 With a background in welding, then as an Episcopalian priest and founder of Loaves and Fishes, Carl Hanson was a perfect fit to take on the role of CEO of the San Luis Obispo Food Bank in 2005.

He knew how to “weld” dissimilar people, make a compelling argument for higher powers and understands the compelling needs of those less fortunate. He has put his talents to good use as the spokesman and manager of the food bank.

Hanson spoke to the Rotary Club of Paso Robles recently and shared some facts about the county’s needy residents. The food bank helps 45,000 people at the low income or poverty level. Of those served, 40-percent are children and 20-percent are seniors. Every day they make choices between food, medicine and gasoline as they don’t have the money for all they need, he said.

Despite the stereotypes, most recipients of the food bank are working jobs, but most at low pay without benefits, he said. The vast majority of recipients are working families, some come from homes where two people work and some have two jobs, he said.

With the philosophy of “no child goes hungry,” meals are provided in schools and when children are not in schools, such as days off and summer, he said. The emphasis is on giving kids “healthy foods”, he said. Must Charities made a major grant to the food bank to feed 5,000 north county children during the time kids are off school.

The food bank accepts donated food and makes purchases of non-perishable food at cost and delivers it to 75 local agencies like Loaves and Fishes for a service fee of 14 cents per pound. “The food is actually free to them and paid for by our donations,” Hanson said. Additionally, the food bank has volunteer gleaners who gather perishable produce for distribution. He said 700 volunteers help glean fresh produce from local fields, farms and fruit trees. Information is available at gleanso.org.

Funding for the food bank comes from local donations, about 55-percent, government sources like the USDA, about 25-percent, grants and service fees make up the rest.