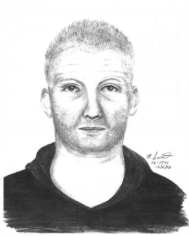 A sketch of the murder suspect.

The husband of a woman who was manager of the Dragon Lake Grill at Lake Nacimiento was killed Tuesday morning in King City, according to reports.

Rodger Anthony Esquivel was at home Tuesday morning on Bassett Street in King City. He was reportedly drinking coffee and reading a book when at 6:37 a.m. an intruder came in and stabbed him to death.

When police arrived they found the man with multiple stab wounds and took him to Mee Memorial Hospital where is was pronounced dead, say reports. The murder suspect is at large.

King City Police say the victim had no gang ties. “However neighbors have said that the police have frequented the house of the next door neighbor, where a young hispanic man living there has had a number of run-ins with the law,” KRKC radio reports.

His wife, Deborah Mills, who once worked at Lake Nacimiento, is an active member of the King City community and works for South County Newspapers.

King City Police released a sketch of the suspect who is wanted for allegedly stabbed Esquivel. “The suspect is described as a light-skinned Hispanic male, about 5-foot-9, 220 pounds, late 30s to early 40s in age, wearing a newer black pullover hooded sweatshirt, new, creased white with black plaid shorts to his knees, and new white unlaced basketball type shoes,” KRKC reports. He was last seen running towards So. Russ Ave.

An account as been opened at Rabobank to help with funeral expenses and donations are needed. The account number is 9647401400.