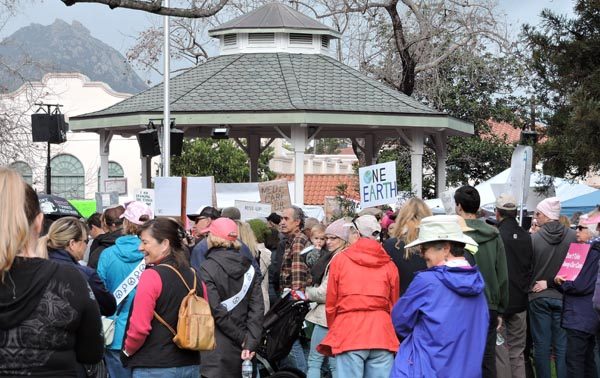 Attendees at the 2017 Women’s March in San Luis Obispo.

–The Women’s March will return to San Luis Obispo on Jan. 18, 2020. Marches and rallies are planned for cities across the country and around the world. The fourth local annual event – which in the past three years drew thousands of supporters – is scheduled to begin in Mitchell Park at 10 a.m. with a rally, and continue with a march through downtown San Luis Obispo at 11 a.m. The theme for this year is “The Time Is Now.”

“We are heading into an historic election year that will decide the direction of our country,” said Andrea Chmelik, Women’s March SLO Lead and communications director. “When we first marched in 2017, our goal was to send a strong message to the administration that we are united in our fight for equal rights and civil liberties. Our message in 2020 is that the time is now to rise up. The time is now to save our democracy and protect our planet, before it’s too late. The time is now to be bold, brave and loud.”

The rally features a lineup of speakers and performers who advocate for human rights, women’s rights, social justice and environmental justice, which are topics central to the Women’s March SLO mission. Among them are Kendra Williams, a Cal Poly Psychology and Child Development Department lecturer, marriage and family therapist, and an advocate for survivors of sexual assault and harassment; Carmen Bouquin, a climate justice organizer, Cuesta College student, and SLO County Youth for Environmental Action founder; Wendy Lucas, a member of the yak tityu tityu yak tiłhini (YTT) Northern Chumash Tribe of San Luis Obispo County and Region; and poet, activist and the 2008 San Luis Obispo Poet Laureate Dian Sousa, who will be returning for the fourth time with an original poem.

Performers include Talitha Gabrielle, Lewis & Rose, Eliana Nunley and Diane Steinberg Lewis. Chanters and drummers, including Samba Loca, will be part of the march program, as well as over 30 nonprofit organizations and activist groups that will share information about their services and volunteer opportunities in the Call to Action Alley.

Since January 2017, Women’s March SLO has organized over 40 events that were attended by 25,000 people, from rallies and marches for women’s rights, immigrant rights or gun safety, to town halls, to panels encouraging women to run for office, and more.

“Women’s March SLO has highlighted the importance of community activism and advocacy in creating political and social change,” said Chmelik. “We’ve seen women organizing, advocating, leading, running for office and getting elected in record numbers. This is not the time to stop. We will continue engaging the Central Coast community in working toward a positive and just future for all people.”

Organizers are asking for donations to help offset the cost of the march. Donations can be made online, or by sending a check made out to Social Good Fund (WMSLO fiscal sponsor) with WMSLO in the memo line to Women’s March SLO c/o Social Good Fund, POB 5473, Richmond, CA 94805.