Radioactive material so diluted and degraded it will be almost negligible 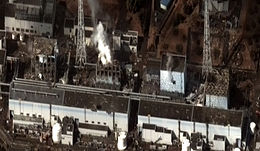 The Fukushima nuclear power plant leaked radiation due to a tsunami in March 2011.

Very low levels of radiation from the Fukushima nuclear disaster likely will reach ocean waters along the U.S. West Coast next month, scientists are reporting.

Current models predict that the radiation will be at extremely low levels that won’t harm humans or the environment, said Ken Buesseler, a chemical oceanographer at the Woods Hole Oceanographic Institution who presented research on the issue last week.

But Buesseler and other scientists are calling for more monitoring. No federal agency currently samples Pacific Coast seawater for radiation, he said. California regularly samples seawater around the state’s nuclear power plants to determine whether the plants are impacting the environment. Those results all are below minimum detectable activity.

The news comes three years after the devastating Japan tsunami and resulting nuclear accident. On March 11, 2011, a 9.0 magnitude earthquake hit off the coast of Japan, triggering a tsunami with waves as high as 133 feet. More than 15,000 people died and about 6,000 were injured. The earthquake and tsunami knocked out power to cooling pumps at the Fukushima Daiichi nuclear power plant complex, causing meltdowns at three reactors.