PENN STATE YORK: Gary Eberle of Eberle Winery in Paso Robles, Ca., award-winning winemaker and entrepreneur, spoke about the challenges and successes in his life and in the winemaking industry he loves during a noon-hour program Oct. 24 at Penn State York. The event, sponsored by the Graham Entrepreneurial Leadership Program’s Visionary Leaders Lecture Series, was open to students who have completed the internship, faculty members, mentors, and other students who are being considered as candidates for the leadership program.

Eberle, 68, visionary leader, wine entrepreneur, and educator, originally from Moon Township, Pa., near Pittsburgh, talked with students about the importance of a college education, something as a high school student he never dreamed he would achieve. The son of a steelworker, Eberle always thought he would graduate from high school and follow in his father’s footsteps. Thanks to a successful high school athletic and academic career however, he was recruited by several universities and enrolled at Penn State.

His college career included playing defensive tackle for the late legendary football coach Joe Paterno at Penn State, and he graduated from the University in 1967 with a degree in secondary education. He recently celebrated 33 years of fine winemaking; during his career he created the fourth winery in Paso Robles, and owns the longest continuously run family-owned winery in the Paso Robles American Viticultural Area (AVA) Forty years ago, Eberle experimented with a little-known grape variety called Syrah, and is now credited with being the first person to plant that variety in the United States. 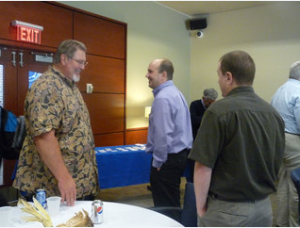 Eberle’s interest in wine started when he moved to Louisiana to pursue a master’s degree in cellular genetics. He met a professor who introduced him to fine wine and he knew he had found his passion. He later moved to California to begin his career in winemaking.

In addition to his accolades in winemaking, Eberle is known for developing the commonly used method for visualizing chromosomes called G-banding. His educational experience includes his degree from Penn State as well as a master’s degree in cellular genetics from Louisiana State University. In addition, he has done doctoral work in enology, viticulture at the University of California, Davis.

He has earned the title, “the grandfather of Paso Robles wine” and was named one of the top 100 influential people (number 65) in the wine industry in America by the popular website Intowine.com. Eberle has received countless accolades for decades of perseverance and a continuous desire to make some of the best wines Paso Robles has to offer. Eberle Winery was named “Winery of the Year” at the 2011 International Sommelier Challenge.

Eberle was brought to the campus by the Graham Entrepreneurial Leadership Program as part of its speakers series that provides students with an opportunity to meet and hear from successful entrepreneurs. The leadership program is an opportunity for Penn State York to partner with industry and help prepare students for jobs once they graduate. Five students have recently completed internships.

The Graham Entrepreneurial Leadership Program coordinates the efforts between faculty, executive mentors, and Penn State York students to develop a tool box of skills for each student designed to support the host company’s culture and the unique demands of their particular workplace. Student interns receive performance appraisals and continuous feedback from the company, through their company mentor, that is shared and discussed with their Penn State York faculty member. Students in this leadership program experience company culture and work on real projects.

“The Graham Entrepreneurial leadership Program is an excellent example of how Penn State York works with local business and industry to develop a workforce for the future,” said Dr. John J. Romano, interim chancellor at Penn State York. “The program not only benefits our students and the campus, it also benefits local employers and the community at large by providing graduates who are well-prepared and able to contribute as qualified team members from the first day of employment,” said Romano. “We are pleased to have the support of the Graham Foundation and thank Donald C. Graham, chairman of the Graham Group, for sharing his vision and giving the campus the opportunity to create this exciting leadership program.”

Students from three disciplines – business, engineering, and information sciences and technology – are currently involved in the program. Penn State York hoped to expand the program to include other majors at the campus.

“I think the most important characteristic of the Graham Entrepreneurial Leadership Program is its emphasis on the close collaboration between the faculty sponsor and the company mentor before, during, and after the internship. Based on this collaboration, faculty members nominate qualified students with specific skills to match company needs,” said Dr. Ali Kara, professor of business administration at Penn State York and one of the lead faculty members in the program.

Kara also notes that during the internship, frequent communication takes place between the company mentor and the faculty supervisor about the intern’s progress and assignment changes are made as needed.

“After the internship, the company mentor provides a comprehensive review of the intern and makes suggestions for desired improvements needed. The feedback about the desired skills and knowledge is then incorporated into the program curriculum in the form of specific course modules, workshops, and trainings,” Kara said.

“We were very pleased to participate in this inaugural year of the Graham Entrepreneurial Leadership Program. We employed three summer interns from the program at Graham Architectural Products Company and at Graham Engineering Corp. The students were well prepared for their internship, performed well, and learned much from their “real business world experience,” said William J. Scott III, vice president of human resources and CHRO at The Graham Group. “We also valued the strong and active support shown by their sponsoring professors. As a result of this successful experience this year, we intend to participate in the program again in 2013.”

Later in the evening on Oct. 24, Eberle spoke to a crowd of more than 200 at Wine and Dine event to help raise funds to support The Graham Entrepreneurial Leadership Program.