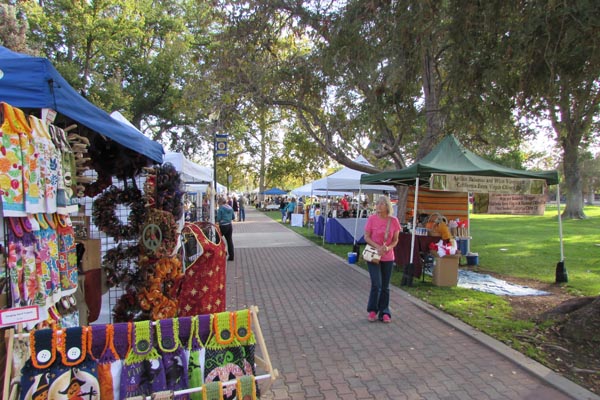 A view of some of the vendors at Saturday’s Golden Oak Honey Festival in Paso Robles. Photos by Jackie Iddings.

Formerly named the Golden Oak Festival, the event expanded in 2014 to include bees and honey. Jodi Tellier approached Norma Moye, CEO of the Paso Robles Downtown Main Street Association with a long held dream of an event where the public could learn about bees and the local honey industry. “She told me to give her a while to figure it out,” said Tellier about Moye’s response. “A few days later she called and told me the honey festival was a go.” Tellier brought the Central Coast Beekeepers Alliance and the Downtown Association together and the new Golden Oak Honey Festival was launched. 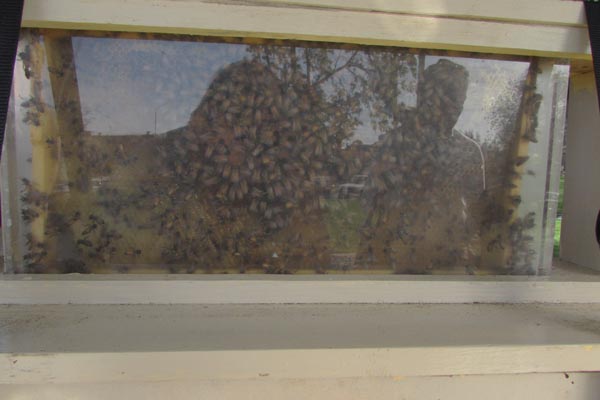 A colony of bees.

Worldwide declining bee populations have been the subject of scientific research over much of the past 12 to 15 years. Restoring bee populations has placed the avocational beekeeper and home gardener in the company of scientists and beekeeping professionals in the critical role for helping restore bee populations as well as other declining pollinating insects. Saturday’s festival brought all levels of bee and honey enthusiasts together in a fun and educational forum.

The seating in front of the park gazebo was filled with people listening to the various presenters throughout the day. Shoppers among many of the vendors booths had the double pleasure of browsing while listening to a topic of special interest.

John Chestnut, one of the speakers, presented the basic beekeeping practices, including how to construct the Langstroth hive, patented in 1852 by Lorenzo Langstroth who is considered the father of modern beekeeping. Chestnut pointed out that beekeeping is not just something as simple as constructing a hive. There are environmental and legal issues to consider as well as understanding the life cycle of bees and their collecting habits. Legally, there are local ordinances to consider, and in some towns and areas of San Luis Obispo County, beekeeping might be prohibited. Where it is allowed, there are specific requirements for setting up and maintaining bee hives.

In an interview with Anna Rempel, who spoke on the topic of “Gardening with Bees,” Rempel stated that along with planting gardens for bees and other pollen and nectar collecting insects, moving away from monoculture agricultural practices is crucial to restoring and maintaining bee populations. “It can be as simple as planting hedgerows of native plants plants around fields and in between the crop rows.” 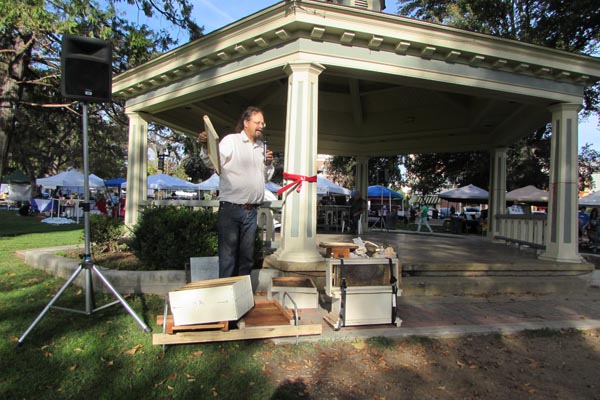 According to the American Beekeeping Federation, bees pollinate crops such as applies, cranberries, melons and broccoli. Certain crops are 90-percent dependent on honey bee pollination. Almonds depend entirely on bees. Bees contribute over $14 billion to the value of U.S. crop production. Many of the country’s crops would not exist without the honey bees at bloom time.

Honey is another aspect of the health and economic benefits from bees. An alternative for sugar and artificial sweeteners, honey not only adds flavor to food, it can act as a binder and thickening agent for sauces and can extend the shelf life of baked goods and is becoming a popular addition to body care products. Local honey vendors Matthew and Shelby Cary sell their PUR brand of honey and body care products from locally collected honey at farmers markets and through Amazon. The Carys also donated 20% of their honey festival sales to help send local youth to diabetes camp.

The March 2015 report released by the National Agricultural Statistics Service (NASS), states 178 million pounds of honey were produced in the U.S. in 2014; 10.9 million pounds from California. In 2003 California was the leading honey producer for the U.S. but slipped from that position due primarily to the drought. California s honey production tumbled from 27.5 million pounds in 2010. As of 2014, California represents less than 10% of the $317 million value of the national honey production. According to Rempel from the Central Coast Beekeepers Alliance, the California drought makes planting drought resistant California native plants even more important for the welfare of bees.

View a video of a live hive of bees at the Golden Oak Honey Festival below: