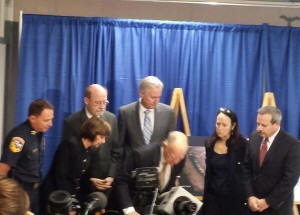 California Gov. Jerry Brown declared a drought emergency Friday for California. The move comes as the state face the worst drought in over 100 years. Like Paso Robles, less rain fell on the state in 2013 than any year since records started being kept in 1849.

That follows two dry years that already have left many reservoirs depleted..

“I’ve called for a collaborative effort to restrain our water use,” Brown said.

The proclamation allows the state to request an emergency declaration from President Barack Obama. The federal declaration would help expedite water transfers, provide financial assistance and suspend some state and federal regulations.

Brown is asking for voluntary water conservation of a 20%. He stopped short of saying the reduction should be mandatory.

The governor directed state agencies to use less water than they do now and to hire more firefighters to prepare for the dry winter. The state had six active wildfires just this week.