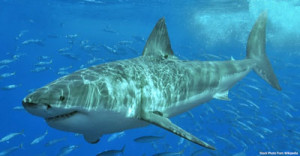 On Nov. 22, Brandt Kehoe, president of Friends of the Elephant Seal, received notification that a great white shark had been detected near the elephant seal rookery at Piedras Blancas. The e-mail message—transmitted simultaneously to the “shark team” at Stanford University—was generated automatically as the last step of a highly complex communications system that was purchased by Friends of the Elephant Seal and installed on October 12 by a three man team headed by Taylor Chapple, a researcher from Stanford University’s Hopkins Marine Station. 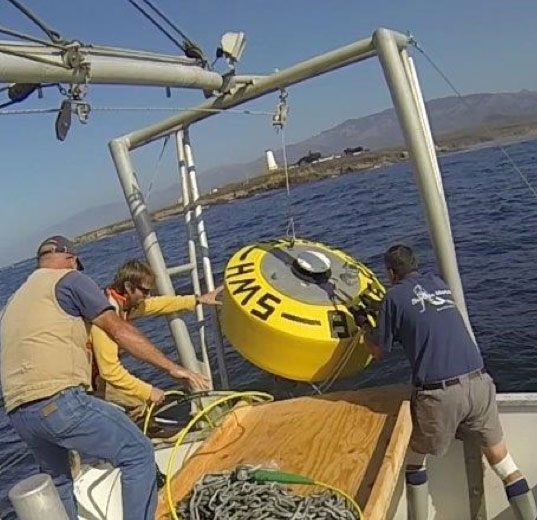 The message was initiated by shark A69-1303-58458, named “The Duke” by the team that tagged him on Dec. 14, 2011 at Tomales Point, north of San Francisco. The tag, a small electronic transmitter, broadcasts a unique code that can be detected by receivers located near elephant seal rookeries at Tomales Point, The Farallon Islands, Año Nuevo and now at Piedras Blancas.

The Duke sent the first message from the Piedras Blancas rookery by swimming within 1,500 feet of the underwater acoustical receiver located 70 feet beneath the buoy pictured to the right and below. When the shark approached the rookery, his unique code was received and transferred up an electric cable to a modem on the buoy where it was beamed to the Iridium satellite network. The satellite relayed the information to a ground station that automatically sent the e-mail within seconds of the initial ping on the receiver.

The VR4 Global, developed by the Vemco division of Amirix is an underwater acoustic receiver that collects information about the presence of animals tagged with acoustic tags, such as white sharks. The Stanford team is listening for specific tag IDs that are recognized by the receiver. When a tagged shark is detected, the team is notified in real time through a surface modem uplink with the Iridium satellite network.

Each acoustic tag sends out a unique code approximately every 120 seconds. The VR4 Global has an underwater receiver that listens at 69 kHz to detect these coded white shark tag IDs. And transfers the information via an underwater electrical cable to a surface satellite receiver unit. Our VR4 Global unit is configured to send a signal via modem to the satellite, which then goes to a ground station on earth. The station then sends email notifications back to the team in the Stanford lab that a particular shark has been detected. This remarkable communication technology occurs within a few moments of the shark swimming by—allowing remote detections and live access.

Source: Friends of the Elephant Seals