– Hansjörg Wyss, the billionaire owner of Halter Ranch Vineyard in Paso Robles, announced today in the New York Times, that he is donating $1 billion to help accelerate land and ocean conservation around the world.

Wyss was born in Switzerland. He made his fortune founding the medical device company Synthes. He now lives in Wyoming and is an active philanthropist.

We Have to Save the Planet. So I’m Donating $1 Billion.

NEW YORK TIMES – Plant and animal species are estimated to be disappearing at a rate 1,000 times faster than they were before humans arrived on the scene. Climate change is upending natural systems across the planet. Forests, fisheries and drinking water supplies are imperiled as extractive industries chew further into the wild.

But there is another, encouraging side to this depressing story: how a simple idea, born in the United States in the 19th century and now racing around the globe, may yet preserve a substantial portion of our planet in a natural state. 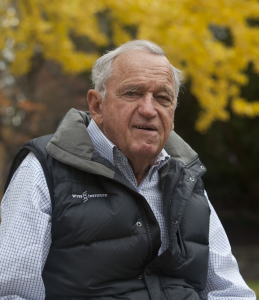 It is the idea that wild lands and waters are best conserved not in private hands, locked behind gates, but as public national parks, wildlife refuges and marine reserves, forever open for everyone to experience and explore. The notion of holding these places in public trust was one I became deeply influenced by as a young man, when I first climbed and hiked on public lands in Colorado’s Rocky Mountains.

Since the creation of the world’s first national park, Yellowstone, in 1872, 15 percent of the earth’s lands and 7 percent of its oceans have been protected in a natural state.

But some scientists, including the Harvard biologist Edward O. Wilson, have concluded that at least half the planet needs to be protected to save a large majority of plant and wildlife species from extinction. Indeed, the food, clean water and air we need to survive and prosper depends on our ability to protect the planet’s biological diversity. In other words, we have to protect half to save the whole.

Every one of us — citizens, philanthropists, business and government leaders — should be troubled by the enormous gap between how little of our natural world is currently protected and how much should be protected. It is a gap that we must urgently narrow, before our human footprint consumes the earth’s remaining wild places.

For my part, I have decided to donate $1 billion over the next decade to help accelerate land and ocean conservation efforts around the world, with the goal of protecting 30 percent of the planet’s surface by 2030. This money will support locally led conservation efforts around the world, push for increased global targets for land and ocean protection, seek to raise public awareness about the importance of this effort, and fund scientific studies to identify the best strategies to reach our target.

I believe this ambitious goal is achievable because I’ve seen what can be accomplished.

Indigenous peoples, local leaders and conservation groups around the world are already busy setting aside protected areas that reflect the conservation, economic and cultural values of nearby communities. Financial support from philanthropists and governments is critical to helping these leaders conserve places like the coral reefs of the Caribbean, the glaciers of Argentina and what is known as the “place of many elephants” in Zimbabwe.

I’ve seen this unfold firsthand. Over the past two decades, my foundation has supported local efforts to protect wild places in Africa, South America, Europe, Canada, Mexico and the United States, donating more than $450 million to help our partners conserve nearly 40 million acres of land and water. And just as the Grand Canyon and the Grand Teton national parks have become economic engines in the United States, these new, locally developed protected areas will create jobs, attract visitors and support sustainable economic growth.

For me, these efforts underscore the power we each have, as individuals, to join together to save the places and wildlife that matter most to us. Every conservation gain I have witnessed in my two decades of philanthropy — from the Crown of the Continent in Montana to Colombia’s newly expanded Chiribequete National Park — was set in motion by local communities that wanted to safeguard these places for their children and grandchildren.

This is an important time. The international community will gather in two weeks to discuss new global targets for land and ocean protection. Representatives of more than 190 nations will meet in Egypt to step up efforts to halt biodiversity loss and protect ecosystems under the Convention on Biological Diversity, an agreement that establishes global goals for nature conservation. Given the scale and urgency of the extinction crisis, world leaders should update the agreement to make a shared commitment to protect at least 30 percent of the world’s marine and land environments by 2030. This clear, bold and achievable goal would encourage policymakers around the world to do far more to support communities working to conserve these places.

We need to embrace the radical, time-tested and profoundly democratic idea of public-land protection that was invented in the United States, tested in Yellowstone and Yosemite, and now proven the world over.

For the sake of all living things, let’s see to it that far more of our planet is protected by the people, for the people and for all time.