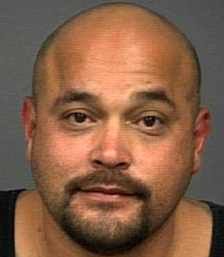 Attempted murder suspect Billy Benjamin Hernandez turned himself in at the Sheriff’s North Patrol Station in Templeton. Hernandez had been on the run since 11-1-12 after witnesses say he attacked a man at a home in the 3200 block of Eagle Point Lane in Heritage Ranch.

Witnesses say Hernandez stabbed the victim multiple times and then fled the scene. Hernandez was arrested for attempted murder and is now in custody at the San Luis Obispo County Jail. The case has now been turned over to the District Attorney’s office for review and the filing of charges. There are no outstanding subjects related to this incident. Booking photo release authorized.

On 11-1-12, San Luis Obispo County Sheriff’s deputies responded to a report of a stabbing at a home in the 3200 block of Eagle Point Lane in Heritage Ranch. Witnesses say the suspect, Billy Benjamin Hernandez attacked another man at that residence and stabbed the victim multiple times.

The victim was taken to a local hospital to be treated. Hernandez fled the scene in a car which was located early in the morning on 11-2-12 in Paso Robles. Hernandez is described as an Hispanic male, 5-11, 245 pounds.