Crimson placed in the highly competitive newsmagazine division that identifies the best ten magazines at the roughly 4,000-student,400-publication convention. It is the program*s sixth consecutive top-10 finish since 2008. 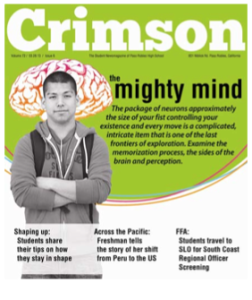 Crimson is the print product from the 25-student journalism program at PRHS that was named an NSPA Pacemaker Finalist, the NSPA*s highest honor, in September 2011. Its publications have received three consecutive All American rankings.

Students Nicolette Jolicoeur, Kelly Munns, and Sarah Wilson lead the PRHS program as chief editor and managing editors, respectively. Most Crimson staffers pursue journalism or communications in college and beyond. Crimson’s web journalism can be found at www.crimsonweb.net. Teacher Jeff Mount advises the Crimson. He has taught high school journalism for 19 years and high school English for 23 years. He can be reached at (805) 434-8967 or at jmount@pasoschools.org.

The National Scholastic Press Association and the Journalism Education Association are non-profit education organizations striving to educate and recognize the work of student journalists, improve the quality of student media, and foster careers in the field.