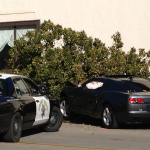 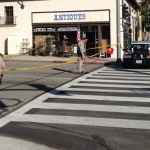 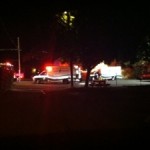 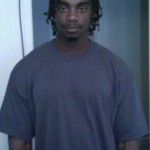 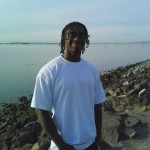 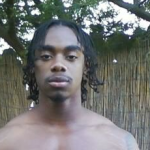 A trial date is set for June 24, 2013 in the case of suspected shooter Clifford Albert Scott.

Clifford Albert Scott, Jr. was formally arraigned in a San Luis Obispo County Courtroom on attempted murder charges stemming from an officer involved shooting incident in Paso Robles. The Sheriff’s Office began its investigation on 10-27-12, when Scott led the CHP on a car chase before crashing in downtown Paso Robles. Scott then ran away and tried to hide. But when CHP Officer A. Ayala found him, Scott began shooting and Officer Ayala returned fire. Both Scott and Officer Ayala were shot. Scott was taken to the hospital for his injuries and then booked into County Jail on 11-1-12.

KCOY TV is broadcasting photos of the man suspected of shooting a Templeton CHP officer early Saturday morning after a high speed chase in downtown Paso Robles. The photos of Clifford Albert Scott, 22, of San Diego were taken from Facebook and confirmed by sources, KCOY reports. Read more at KCOY.

Sources inside local law enforcement say Scott had two passengers in the car with him and a small amount of narcotics in his possession. They also said the 30-year veteran officer of the CHP was hit once in the side of his abdomen, in an arm and on a thumb. He was wearing his bulletproof vest and was released from the hospital the same day as the shooting.

Clifford Albert Scott Jr., 22, of San Diego was booked into county jail on suspicion of attempted murder, according to the sheriff’s department.

Scott was booked, but he remains hospitalized at an undisclosed hospital.

San Luis Obispo County Sheriff’s investigators report that at about 5:30am the California Highway Patrol initiated a traffic stop on a vehicle travelling on HWY 101 northbound just south of the North Spring Street exit.

Officers pursued the suspect on foot and gunfire was exchanged between the suspect and a CHP Officer at 14th Street/Park Street. Both the Officer and suspect sustained gunshot wounds and were treated at the hospital for their injuries.

Investigators closed the area and spent the day collecting evidence. It was reopened about about 4:30 p.m.

Over a dozen officers from the Paso Robles Police Department, San Luis Obispo County Sheriff’s Department and CHP are walking the streets, taking pictures from rooftops and rustling bushes.

Two blocks of Park Street from 13th to 15th streets are closed off.

A tow truck is loading the suspect’s blue Chevy Camero at 13th and Spring streets and a tree trimming crew is clearing a fallen tree in the middle of the street.

Several businesses in the downtown area are closed for the day. 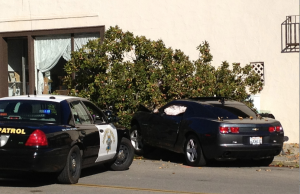 A Chevy Camero crashed into a tree in front of Great American Antiques.

Shots rang out on the streets of Paso Robles early this morning around 6 a.m.

A CHP officer and a suspect reportedly shot at each other early Saturday morning when a high speed chase ended in a car accident at 13th and Spring streets in Paso Robles.

The officer and the suspect were taken to a local hospital. Their condition is not know.

Reports say the officer initiated a traffic stop on Spring Street that started a high speed chase through town. Officials say the suspect crashed a blue sports car and then fled on foot to 14th and Park streets where shots were fired. 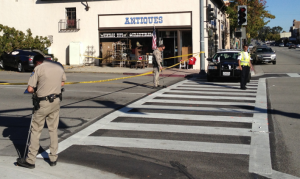 CHP investigates the scene of a shooting on Saturday afternoon.

Four CHP officers had portions of 13th Street closed off near Spring Street at 10 a.m. this morning where they were investigating the scene.

A CHP airplane was spotted circling the area of the scene this morning.