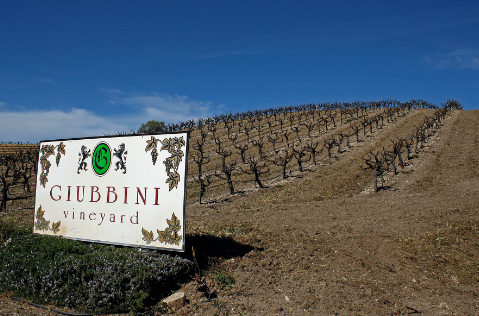 Zinfandel vines on the Giubinni Vineyard at Rotta Winery.

Who’s on First, Who’s on Second?

A brief history of the Paso Robles wine region

Visitors to the Central Coast often come to sample the vintages of the more than 200 wineries in the Paso Robles American Viticultural Appellation, but not so long ago this was a sleepy area with only a handful of tasting rooms available for the public. Today we wonder how it all got started and who came first.

Believe it or not the art of making wine on the Central Coast goes way back to the time of the Franciscan Friars who traveled through California establishing Missions. These plantings began around 1790 at the Asistencia on the Santa Margarita Ranch. You can still see some of those vines growing adjacent to the still existing Asistencia, which at that time was an assistant chapel to Mission San Luis Obispo and Mission San Miguel. Vines were also planted in the vineyard north of the San Miguel Mission at the present Vineyard Canyon. The padres produced wine for their communion service and also made brandy which they exported.

A visit to Dallidet Adobe in San Luis Obispo will have you finding out that the Frenchman Pierre Hypolite Dallidet was first landowner to put in a vineyard and develop a commercial winery right around 1853.

Now herein begins a bit of controversy as to who came next and in what area. We are, in this article, primarily interested in the Paso Robles region. Some historical writings say it was Andrew York, a rancher from Indiana who planted a Zinfandel vineyard in the late 1870s that eventually had him establishing Ascension Winery that later became York Mountain Winery. And while it can possibly claim the title of being the oldest continuously operating winery in North County, it can only say that thanks to being purchased by Epoch Winery in 2010. Epoch is in the process of resurrecting that vineyard and replanting it. This vineyard resides in its own 6,400 acre York Mountain Appellation. Epoch’s tasting room is located at the York Mountain site on York Mountain Road off of Route 46 West.

But York wasn’t the first winery in the Paso Robles area. The Frenchman Adolph Siot put in Zinfandel grapes in an area west of present day Templeton sometime around 1853 to 1856. That vineyard and subsequent winery was sold to the Rotta family in 1908 and except for a brief time during the 1970s when it changed hands, it has remained as Rotta Winery to this date.

Wow! What happened next? Well, several immigrant farming families settled here and got into the mix from about 1880. The Ernst family came from Illinois and planted 25 varieties of wine grapes and produced wines that became well known. The first white wine was produced by Gerd Klintworth on the east side of the Paso Robles area in 1886.

Italians were not to be left out either and the names Martinelli, Dusi, Pesenti,Vosti, Busi, and Bianchi are names you may still hear today as succeeding generations have continued the winemaking success and Zinfandel became the west side’s primary wine.

A recent visit to Rotta Winery got this author talking to owner Mike Giubinni, a Rotta family grandson, and he indicates that the original four wineries in Paso Robles were Rotta, York, Pesenti, and Martinelli. “Pesenti came in around 1920, “Giubinni said. “Martinelli is no more.”

Just down the road a piece from Rotta Winery is Turley Wine Cellars, who bought out Pesenti in 2000 in order to have the 80 year-old vineyard of Zinfandel. Frank Pesenti put in that vineyard in 1923.

Frank Nerelli, who owns Zin Alley on Route 46 is a grand-nephew of Pesenti and has on display in his winery tasting room some of the original bottles of Zinfandel produced at Pesenti Winery. The Nerelli family also got their start planting a vineyard at the foot of York Mountain in 1917. They hold the distinction of having their winery be the first to be bonded following the repeal of prohibition.

“What happened during prohibition?” I asked Giubinni. He laughed and with a twinkle in his eye said, “We all produced a lot of church wine!”

The 1920s saw vineyards and winemaking grow in the Paso Robles region. In 1924 Sylvester Dusi and his wife Caterina purchased a vineyard and later sons Benito, Guido, and Dante planted Zinfandel on an additional property on the west side. The winery has remained in the family and today, grand-daughter of Dante, Janell Dusi, is winemaker for J Dusi Wines. Grapes from Dusi Vineyards are well sought after by other area wineries such as Tobin James, Turley, Cypher, Four Vines, and JC Cellars.

A significant boost to the winemaking success of this region came about when the famous Polish pianist Ignace Paderewski purchased 2,000 acres in the Adelaide area in the early 1920s. He planted Petite Sirah and Zinfandel and following prohibition had his wine made at York Mountain Winery. Paderewski’s Rancho San Ignacio grapes became award winners and gained a reputation for the Paso Robles wine region as a premier wine growing area.

That reputation has never gone away and in the succeeding years many new vineyards have sprung up. It doesn’t matter who came first or who came second, a tour of the tasting rooms will show you the infinite variety of the vintages and the skills of the winemakers at the more than 200 wineries that now take their place in one of not only California’s, but the world’s most notable winemaking regions.