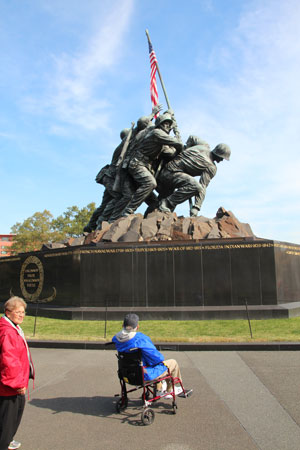 An Iwo Jima Survivor at the Marine Corps Memorial. He asked to be wheeled to the back side so he could see it from the same location as where he was standing when he saw the original flag raising on Suribachi. Photo by Rex Thornhill.

In 2007, 1,000 World War II veterans died every day. Today, so many veterans have died, it’s down to 600 a day, and they are at an average age of 90 years old, says Rex Thornhill, a board member of Honor Flight Central Coast California. “We have lost so many good men.”

Thornhill, a Paso Robles podiatrist, and a group of supporters formed a Central Coast chapter of Honor Flight. The Honor Flight Network is a non-profit organization created solely to honor America’s veterans for all their sacrifices. They transport veterans to Washington, D.C. to visit and reflect at their memorials. Top priority is given to the senior veterans – World War II survivors, along with those other veterans who may be terminally ill.

“It’s a life changing experience for anyone who goes,” says Thornhill, who last year accompanied local veterans Ed Monteith and Don Keefer to the nation’s capital.

“The vets fly free and the guardians pay their own way,” he says. “We are planning our first flight in May 13-15 and will be taking at least 12 veterans and their guardians,” he says. “This will be our inaugural flight. We already have more vets than we can take on the first flight.”

The price per veteran is about $1,500 and includes the flight, transportation, hotels, and food. To donate to the Honor Flight, contact Bear McGill at (805) 610-4012 or email honorflightccc@gmail.com.

The picture here shows an Iwo Jima Survivor at the Marine Corps Memorial. He asked to be wheeled to the back side so he could see it from the same location as where he was standing when he saw the original flag raising on Suribachi. I can’t imagine the feelings and thoughts that went through his head. 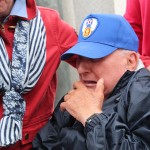 Veteran Alex Palos is overcome with emotion at his visit to the memorials last year. He passed away last month. 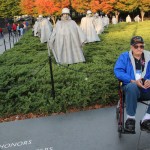 A veteran at the Korean War Memorial. 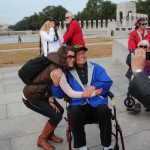 A girl came up and gave this veteran a kiss on his visit to the memorials. 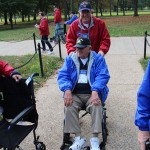 An Honor Flight veteran is wheeled to the World War II memorial.