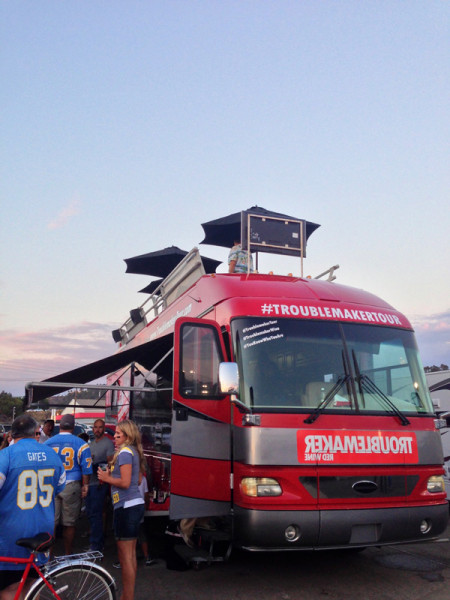 “We love the thrill and endless possibilities of the road, and we know each stop on the Troublemaker Tour will allow us to make personal connections with our fans,” says Hope. “You know who you are. You’re either on the bus, or you’re off. Anyone looking for fine crystal stemware can find a traditional wine tasting. We’re inviting everyone who understands that good wine goes hand in hand with good times.”

The 40-foot long Airstream Skydeck, painted red to match Troublemaker’s bold package design, comes fully stocked with Troublemaker wine and the entire Hope Family Wines portfolio. At each stop, the winery will partner with select accounts for special promotions. Troublemaker’s winemakers and winery staff are inviting wine lovers over the age of 21 to visit the bus for a taste, or to stay and relax for a while on the roof.

Full details on the tour will be updated online at www.Facebook.com/Troublemaker. Visitors will be encouraged to join the conversation online via Twitter @TroubleMkrWine and Instagram @TroublemakerWine and incorporate the use of hash tags: #TroublemakerTour, #TroublemakerWine, #YouKnowWhoYouAre.

Schedule of the Troublemaker bus tour

Hope Family Wines is a family-owned and operated winery in Paso Robles, CA, encompassing five brands: Liberty School, Treana, Candor, Austin Hope and Troublemaker wines. The Hope family arrived in Paso Robles in 1978 and began planting wine grapes. Over time it became clear to the Hopes that Paso Robles was capable of producing world-class wines. They were among a handful of pioneering families who helped to shape and gain recognition for this distinctive wine-growing region. After growing grapes and developing vineyards throughout the eighties and early nineties, they began producing estate wines under the Hope Farms label. The Hopes established Treana Winery in 1996, to focus on regional blends from Paso Robles and the Central Coast. This same year, they incorporated Liberty School into their winery. In 2008, Hope Family Wines became an umbrella moniker to encompass the brands, which now includes Austin Hope, Candor and Troublemaker wines.