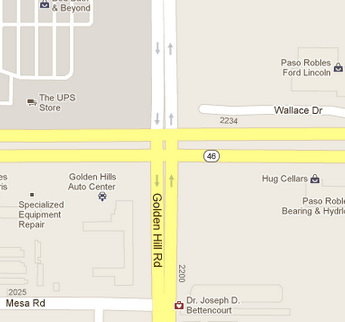 “We drove by a horrific accident on Monday afternoon at the corner of Hwy 46 & Golden Hill. There doesn’t seem to be any coverage anywhere in our local media about this. We drove past it and saw one car down in the ditch on the northwest corner of Golden Hill at Hwy 46. The other car they were towing from there was in horrible shape. No clue what happened but would like to know whenever you find out anything. Do you know what happened?” 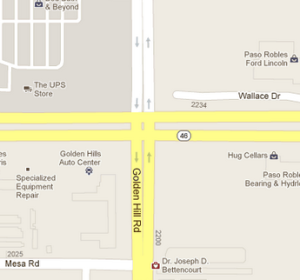 On 4/22/13 at approx. 5:20 PM units from the Paso Robles Police Department where dispatched to a reported injury traffic collision at the intersection of SR 46 E and Golden Hill Rd. Upon arrival officers located a three vehicle accident in the middle of the intersection. During the course of the investigation officers learned that a vehicle traveling E/B on SR 46 E attempted to make a left turn onto N/B Golden Hill Rd against the red signal. The vehicle broadsided a vehicle that was traveling W/B on SR 46 E, spun 180 degrees and was rear ended by another vehicle traveling W/B on SR 46.

The driver of the first vehicle was identified as Patricia Webb, 54 yrs. of San Miguel. She was transported to Twin Cities Hospital for a complaint of pain to her chest.

The driver of the second vehicle was identified as George Nichols, 61 yrs, of Atascadero. He was transported to Twin Cities Hospital for a laceration to his head.

The driver of the third vehicle was identified as Jason Warner, 38 yrs, of San Simeon. He was not injured.