Paso Robles News|Wednesday, May 12, 2021
You are here: Home » Politics » How to win a school board election

How to win a school board election 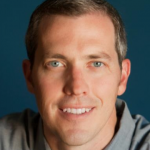 A new candidate, Joel Peterson, was the top vote getter by a wide margin. His 9,182 votes put him far above the 6,700 required to win. How did Peterson win so authoritatively, even faced with two incumbents?

Here’s how to win a school board election in Paso Robles:

Before even thinking of starting a campaign you need to build up your name recognition and get involved in the community. Peterson volunteered for years as a Paso Robles Planning Commissioner and is Chairman of the Paderewski Festival. He is active at his church and in the local wine industry as a marketing and communications manager with Hope Family Wines. He received some name recognition because his grandmother, Virginia Peterson, was a longtime local educator. To get more involved in the schools, he started attending regular meetings of the school board.

Bring together a group of supporters you can count on for good advice and help. Before he decided to run for office, Peterson invited his friends to a backyard barbecue to ask them for advice and input. He planned for five speaking engagements and five coffees with community leaders.

Peterson’s goal was to raise $2,000 to $3,000 total for the campaign. He got started by hosting a kick-off fundraiser at Cass Winery. It was a Thursday night from 5 p.m. – 7 p.m. about two months before the election. He invited 30 people and had about 14 attend. When folks came in he handed them a flyer, a call to action, that included a box asking for help:

This event raised over $1,000 and was a successful kick off. Peterson raised a total of $3,500 over the course of the campaign.

It’s easier to campaign when you break up your voters into demographics to target. Peterson created subgroups to fit the community and his personal connections.

Ask for them! Peterson asked prominent supporters if he could use their names and included a list of endorsements on his flyer, including San Luis Obispo County Supervisor Frank Mecham. “I chose to get them from those people I felt were respected locally, especially in the arena of education,” Peterson says.

Peterson says he spent about eight to 10 hours a week working on the campaign for two months before the election. There was time planning, calling, asking for votes, writing ad copy, responding to questionnaires from the teacher’s union and newspapers.

Be honest and very positive, Peterson said. Don’t say anything negative about the competition. Be ready to answer common questions.

Why are you running?

“I have deep roots in Paso Robles. My grandmother, Virginia Peterson, was an educator for over fifty years. I have two young daughters, both of whom are attending or will attend Paso Robles public schools.”

What are you going to do?

He had three main points he talked about when asking for support.

Are you going to (fill in the blank)?

If he didn’t have a specific answer he would answer by saying he is looking forward to studying the issue. “It’s OK to say ‘I don’t know,” he said.

How can I help?

When people asked this question, “I asked them to ask for votes for me,” he said. 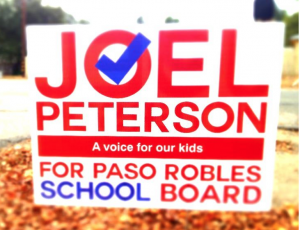 Signs – “Signs are key,” Peterson says. He printed a placed 100 small yard signs and eight large campaign signs at high traffic locations. He called property owners and asked for permission before putting these up at large intersections around town.

Flyers and buttons – He carried them around with him everywhere and asked his close friends to hand them out.

San Luis Obispo Tribune – Front-page sticky note Sunday before the election on every newspaper in the 93446 zip code, $700. “I asked the Tribune if they were going to endorse a candidate and how I might tell them more about myself,” he says. But the newspaper decided it didn’t have time to meet all the candidates and make an endorsement.

Facebook – “Facebook ads were great,” Peterson says. He created a Facebook page for the campaign “Vote for Joel Peterson” instead of doing a website. He spent $150 in Facebook ads and got up to 200 fans. “I only targeted local voters, not friends in other states,” he says. He posted updates about twice a week.

Radio – “I decided against KPRL and used that money for the Tribune stickers, but local radio would have been my next step if I had another $1000,” he says.

Peterson clearly knows how to win a school board election, but what would he have done differently? He said he would have started early and formed a campaign committee. He would have liked more interaction and advice, help with tasks like putting signs up, and a proofreader for all the copy he wrote without having to always ask his wife, Dagny.