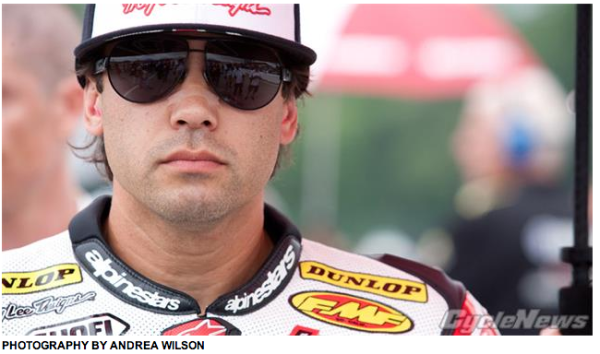 CycleNews reports – Plain and simple: Jake Zemke loves to race motorcycles. And now the former Daytona 200 winner and former AMA Superbike winner will get a chance to do it again as he’s inked a deal that will see him aboard a Riders Discount Triumph 675 beginning this weekend at Miller Motorsports Park in Toelle, Utah.

Zemke will team with Joey Pascarella for the remaining three rounds on the AMA schedule and the Paso Robles resident is looking forward to getting on the Triumph.

“It’s really good in stock from and I’m really looking forward to seeing what we can do working within the AMA rules for DSB and see how many things we can improve on the base package which is already good,” Zemke said. “We really want to get the thing up there and put it up on the podium and get to the front. Which is going to be tough in that class especially coming in at this point in their season where everybody’s pretty dialed in. But I’m definitely up for the challenge. I’m really looking forward to it.”

Zemke’s had a few one-off rides this year when he filled in for an injured Garrett Willis on the Desmo Veloce Ducati for the Daytona 200 and when he rode a privateer Kawasaki at Laguna two weeks ago. Zemke had been talking with the Riders Discount team early in the season, but adding a second bike to the effort doesn’t happen over night.

Read the full story in CycleNews