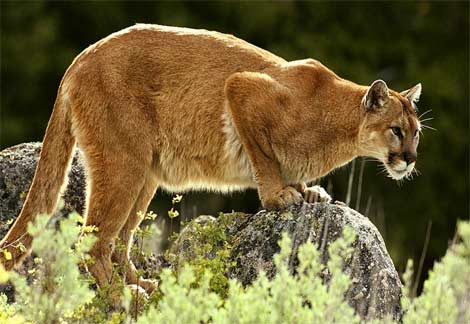 Photo of a mountain lion from National Geographic.

Sighting means hikers and joggers should be alert

A Paso Robles Daily News reader reported a mountain lion spotting this morning in the Paso Robles neighborhood near Charolais and Rambouillet roads on the south east side of town. The mountain lion, also know as a cougar or puma, was reportedly chasing a deer. The neighborhood is surrounded with wildland areas. The female jogger said it was the second sighting in a year.

The mountain lion is a common predator in San Luis Obispo County and throughout California. It is also known as a puma, cougar, and catamount. Local mountain lions like to prey on deer, though they also eat smaller animals such as coyotes, porcupines, and raccoons. They usually hunt at night or during the gloaming hours of dawn and dusk. These cats use a blend of stealth and power, stalking their prey until an opportunity arrives to pounce. They will then strike the back of the neck with a fatal bite. They are known for an shrieking cry that sometimes sounds like a woman screaming. Listen to a mountain lion scream here.

Mountain lions require a lot of space to live. Only a few cats can survive in a 30-square-mile area. They are generally solitary and shy animals, rarely seen by humans. They occasionally attack humans, usually children or solitary adults, especially females and smaller adults. There are typically four attacks and one human fatality each year in North America.

Tips on what to do if you see a mountain lion

If you have seen a mountain lion in the Paso Robles area, please post your information in the comment section below. This will help alert fellow hikers, joggers and residents. Please include the date, time and exact location of your sighting along with a description of the scenario.