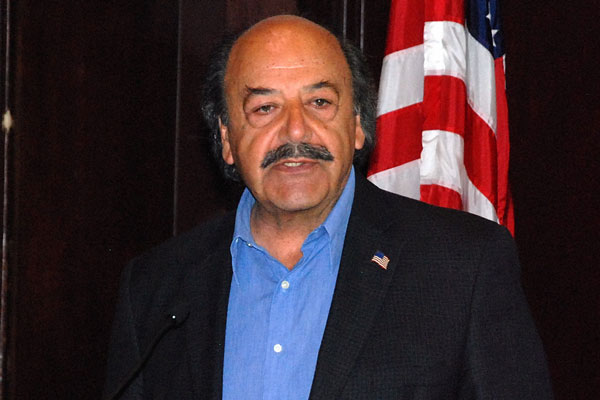 State Assemblyman Katcho Achadjian (R-Arroyo Grande) spoke to constituents at the Paso Robles Rotary Club Thursday and highlighted examples of waste, fraud and abuse at the state level that he would like to see addressed. Achadjian represents the 35th Assembly district which includes Paso Robles.

One of Achadjian’s subjects of waste is the extensive list of state commissions and commissioners. There are currently over 500 California commissions, agencies and departments. Achadjian held up a 6-foot scroll of them listed in small print. The governor often appoints donors to these boards, Achadjian said, and the commissioners typically receive over $100,000 a year in compensation for attending meetings that are schedule once a month or even less often.

Achadjian’s said he was successful in helping eliminate and merge a handful of the commissions, but there is much more work to be done.

Examples of waste, fraud and abuse cited by Achadjian

Killer collected unemployment checks while in jail, authorities say
A convicted killer who got caught because he’d tattooed a graphic mural of the murder scene on his chest allegedly raked in more than $30,000 in unemployment benefits while he sat in the Los Angeles County jail system, a sheriff’s spokesman said. – LA Times

Rampant recycling fraud is draining California cash
Fraud rings bring cans and bottles from other states and illicitly ‘redeem’ deposits that were never paid. And some private recycling centers might claim bigger reimbursements than they deserve. Just over 8.5 billion recyclable cans were sold in California last year. The number redeemed for a nickel under California’s recycling law: 8.3 billion. That’s a return rate of nearly 100%. That kind of success isn’t just impressive, it’s unbelievable. But the recycling rate for certain plastic containers was even higher: 104%. – San Francisco Chronicle

State spends $800,000 to guard incapacitated prisoner
A degenerative nerve disease has left 57-year-old California inmate Edward Ortiz semi-paralyzed in a private Bay Area hospital for the last year. The breathing tube in his throat tethers him to a ventilator at one end of the bed; steel bracelets shackle his ankles to safety rails at the other. Still, California taxpayers are shelling out roughly $800,000 a year to prevent his escape. The guards watching Ortiz one day last week said department policy requires one corrections officer at the foot of his bed around the clock and another guard at the door. A sergeant also has to be there, to supervise. – LA Times

Democrats have a super majority of the California State Senate and Assembly, meaning they don’t need a vote from a Republican like Achadjian. Nonetheless, Achadjian says he has had success working with Governor Jerry Brown (D) and fellow legislators.

Achadjian was born in Lebanon and is of Armenian descent. He is a naturalized US citizen and a graduate of Cal Poly, San Luis Obispo. Prior to being elected to the state assembly, he was a member of the San Luis Obispo County Board of Supervisors. He and his family live in Arroyo Grande, where he is a business owner.