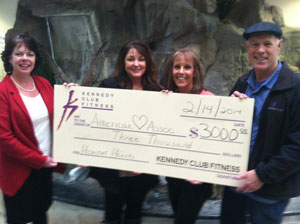 Kennedy Club Fitness recently presented a check for $3,000 to the American Heart Association. The funds were collected during two membership drives in 2013.

The first was during the month of March culminating with the April 7, 2013 North County Heart Walk at Pear Valley Vineyards in Paso Robles. The second membership drive with a percentage of proceeds benefitting the American Heart Association was during the month of September, ending with the October 5th Heart Walk on the Bob Jones Trail in Avila Beach.

Both membership drives raised a total of $3,000 for the American Heart Association. Says CEO and founder, Kevin Kennedy “Our members and staff at Kennedy Club Fitness are committed to work together to make SLO County the healthiest place in the country, and in this case, one heart at a time.” Kennedy would also like to thank their media partners, Coast 101 FM, Charter Media and Tribune for promoting the events.