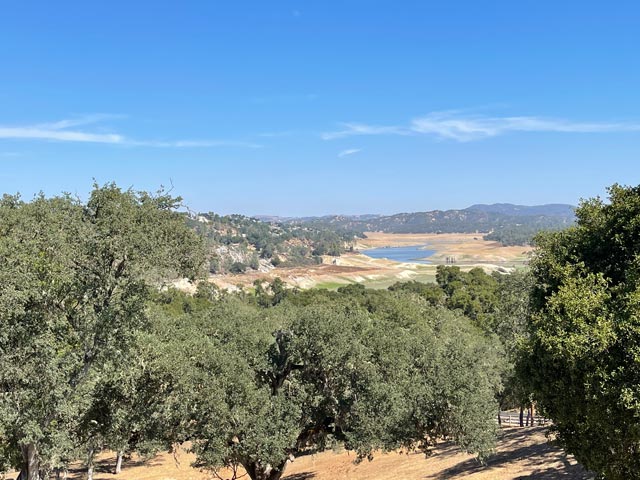 A view of Lake Nacimiento from the Running Deer neighborhood shows how low the water level is this year.

Water level is low, but it’s been lower

–Low water levels at Lake Nacimiento are concerning visitors and residents of the area. Since construction on the dam at Nacimiento River was completed in 1956, the 18-mile long lake and its 165 miles of shoreline have become a popular recreation destination and home to the Heritage Ranch and Oak Shores communities and the Lake Nacimiento Resort.

As of Saturday, Sept. 24, the interactive water level graph on Lakes Online shows the water level at 706.48 feet at its deepest point. The minimum pool is 687 feet. The minimum pool is the level at which the Monterey County Water Resources Agency (MCWRA) only releases water in small amounts to support fish spawning and rearing in the lower Nacimiento River. “Under contractual agreement, the minimum pool volume is reserved for use by San Luis Obispo County,” said Brent Buche, General Manager of MCWRA.

The lake has been below minimum pool four times since 1958, the most recent was in 1989, according to the Nacimiento Reservoir Elevation graph available from the MCWRA, and shown below. The California Department of Water Resources reported a five-year drought from 1987-1992.

If the lake level reaches “dead pool” at 607 feet water cannot physically flow out of the reservoir and “10,300 feet remain in storage,” said Buche. “Dead pool” means the water in a reservoir cannot be drained by gravity through its dam. 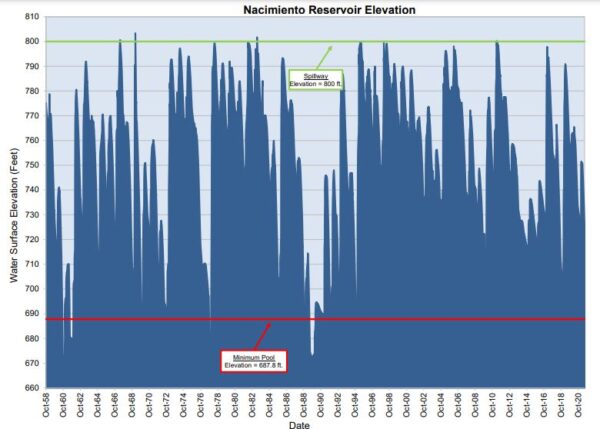 “Over the 62-year period of record, September elevations have been this low ten times,” said Buche. “The ability to store large volumes of water at Nacimiento during wet periods has historically enabled the agency to operate through most droughts without the kind of severe reductions in elevation seen during the current drought. Other multi-year droughts such as 1977-78 and 1987-1991 resulted in similar elevation drops.”

The five-year drought from 2012 to 2016 didn’t result in lower levels because repairs to the dam hampered the ability to release water to recharge the groundwater basin. The groundwater basin is recharged by releasing water into the Nacimiento River, which flows to the Salinas River. The primary source of water for the lake is from the Nacimiento River followed by the watershed surrounding the lake. “A small fraction is from rain falling directly on the reservoir,” said Buche.

Where does the water go?

During the peak of the conservation season, Buche said, the bulk of the water released is “put to good use by Salinas Valley farms and urban water purveyors.” Water is extracted from the groundwater basin by wells with a small amount by surface water diversion near the coast. From 1-5% of the water is allotted to support fish habitat along the Salinas River. Some 5-10% is lost to evaporation and vegetation uptake along the Salinas River corridor.

Water used by San Luis Obispo County is extracted into a pipeline by a  facility at the lake. The 17,500-acre feed allotted to SLO County is approximately 10% of the maximum amount released by MCWRA.

Who owns the lake?

Officially known as a reservoir, Lake Nacimiento is owned by Monterey County and controlled by its water resources agency. Nacimiento Dam is under the jurisdiction of the California Department of Water Resources, Division of Safety of Dams (DSOD) and the Federal Energy Regulatory Commission (FERC). The FERC has jurisdiction due to the existence of a 4-megawatt hydroelectric plant.

The lake was developed and paid for by Monterey County to recharge groundwater for Monterey County use, for flood control, to replenish water for fish habitats, and for recreation. San Luis Obispo County retained the rights to 17,500-acre-feet of water per year. This arrangement was an almost immediate cause of strife between the two counties when, in 1955, the original agreement was questioned. An Aug 21, 1955 article in a Paso Robles newspaper, the Sunday Review, reported that “a gentlemen’s agreement” with San Luis Obispo County was contested by Monterey County. Eventually, an agreement was reached, formalizing the amount of water allocated to SLO County.

Even though the water was waiting there, SLO County residents repeatedly voted down bond measures to finance the distribution system for the water. The San Luis Obispo County allotment went unused until October 2007 when construction started on a pipeline to bring water from the lake to Paso Robles, Templeton, Atascadero, and San Luis Obispo. The project went online in January 2011. The cost was $76.1 million for three pump stations, three storage tanks, a control system and 45 miles of pipeline.

An article in a March 2018 issue of The Tribune, reported that unregulated camping at Lake Nacimiento in the 1960s had created slum conditions. Campers created sanitation problems because of makeshift toilets or the lack of toilet facilities. As many as 30,000 campers crowded the banks. The San Luis Obispo County Planning Commission revoked temporary campsite permits in 1966.

In 2019, a group representing Lake Nacimiento property owners sued Monterey County for draining so much water from the lake that “that it has become nearly unusable by property owners and visitors, causing a loss of property values.” The lawsuit is continuing and updates are available on the Nacimiento Regional Water Management Advisory Committee (NRWMAC) website.