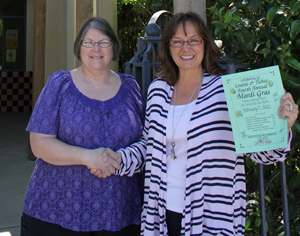 The scope of marketing services provided may include: advertising consultation, email marketing, local public relations, search engine optimization and/or a social media campaign as deemed appropriate by the agency for the chosen event.

As a way of giving back to the community that has supported AR & Co. PR & Marketing for the last 13 years, the program is designed to assist one North County charity per year with the promotion of a charitable event, at no cost to the charity. A downloadable Request For Proposals for the program is now available online on the AR & Co. website homepage: www.arandcompany.com.

“My staff and I enjoyed helping Loaves and Fishes build their annual fundraiser marketing plan last year and look forward to helping another charity this year,” said Angela Robinson, AR & Co.’s founder and president. “Although we can only help one a year, we hope to someday be able to say that we helped every charity in the North County.”

AR & Co. requests that any interested North County charities download the Request For Proposals and submit them via email in digital PDF format on or before May 15, 2014. The program is limited to one North County charity and one event per year to receive the in-kind donation of services for that calendar year. The winning charity will be selected and announced on June 3, 2014.