Local author connects children with language and limerick through app

“I had a dream that I was talking in rhyme and limericks and when I awoke, I immediately started writing the limericks down,” said Arkenstone. “In four days I had 50 limericks and about 110 magical and silly characters for them. I called a friend who is an Apple IOS developer and mentioned that I would like to make a children’s app for these limericks. We found an illustrator and the three of us created the first app from one of the books of limericks I wrote called Fairy Tale Limericks. We ended up writing code for little games and a lot of interactive activity. Along the way, I became an Apple IOS developer, as well.”

The United States, China and Japan are some of the biggest app buyers. Having the apps in other languages creates a further reach in the world. It also gives kids and adults an opportunity to learn a bit of the other languages since it is easy to switch languages in the app. There are quite a few more languages that will be plugged into the app this upcoming year. 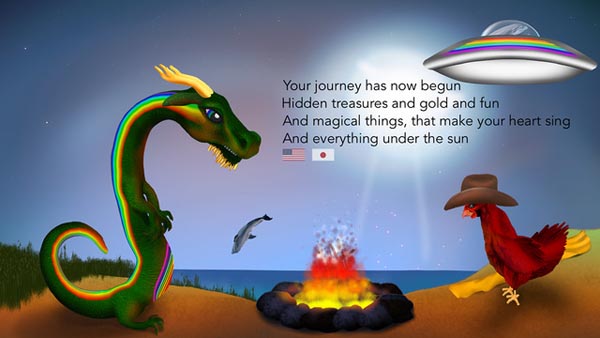 “Fairy Tale Limericks is a fun mix of interactive storytelling, limerick rhymes, exploration and discovery, treasure hunt, coloring activity, game, musical exploration, and multilingual experience,” said Arkenstone. “It offers a truly unique and diverse app experience that entertains and educates the young and not-so-young people in your life. Come meet Klaus the Dragon, Ruby the Red Hen and the whole gang, as your children turn the pages in search of hidden treasures, exploring land, sea and air, and discovering hidden secrets with magical elves and flying dolphins, all while learning Fairy Tale Limericks spoken in multiple languages at the tap of a button. Fairy Tale Limericks offers English and Japanese with Chinese and several other languages on the way.”

“Years ago, when I was at Paso High, I used to sing and play guitar after school at the children’s library for the kids,” said Arkenstone. “Located then downstairs in the Carnegie Building in the Paso Robles Park, I also taught private music lessons. After graduating, I was a Physical Education coach and I taught music at St. Rose for a year. Currently I am building up the Limerick Foundation, which is charity I am getting underway for children. Creating a sustainable foundation for children’s causes is definitely a goal for the future. And, of course, adding more apps. Barnyard Limericks is the next one in line.”

Arkenstone is also a recording artist and owns her record and music publishing company. Learn more about Arkenstone and her many creative projects at http://limerickclub.com.