Paso Robles News|Friday, August 7, 2020
You are here: Home » Top Stories » Local brings awareness to human trafficking with ride across US

Local brings awareness to human trafficking with ride across US 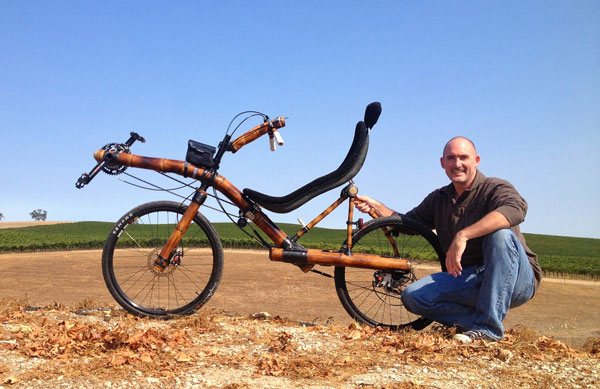 Dug Shelby is riding across the country.

PASO ROBLES – As he departs on Sept. 16 to begin his biking trek from Paso Robles to New York, Dug Shelby will leave with one thought on his mind – to bring about more awareness to the issue of human trafficking.

Shelby, a local taxi cab driver and photographer who moved to Paso Robles from Santa Barbara in 2003, will be riding on a handmade recumbent bicycle constructed of bamboo during his 5,000 mile trek across the country. He will be traveling completely unsupported, with no support vehicle or other riders, and plans to complete the ride in 45 days at an average of over 100 miles per day.

“This will not be a leisurely bike ride,” Shelby said. “I want to put myself out there; the people that I am riding for do not have easy lives and what I am doing is nothing compared to what they have endured.”

The issue of human trafficking became a cause for Shelby in 2008 when, while on photography assignment in India, he witnessed firsthand the plight of women and children being forced into sexual slavery in the Dubai red light district.

“I saw 10 and 11 year old girls working the red light district,” he said, “and I witnessed women and children who were being rehabilitated through the organization I was working with. I have two sisters and three nieces and it really hit home for me; these are someone’s daughters.”
Once he returned to the U.S. Shelby was unable to forget the faces of the people he had been photographing – that’s when he knew he had to do something to bring awareness to their plight.

“The more I researched, the more I found out that human trafficking is a worldwide problem,” Shelby said. “It also exists right here in the United States; it’s just more hidden and sometime harder to see. I felt such discontent and I knew I had to do something.”

And he has been doing his part to bring about awareness ever since. From writing about the issue on his blog, to raising funds for victims, to talking to just about anyone who will listen, Shelby has spent endless hours dedicated to the betterment of the lives of others.

In 2011, Shelby spent four months hiking 2,000 miles of the Pacific Crest Trail, from Mexico to Canada, to raise awareness to the issue of human trafficking. He sees his current effort of biking across the U.S. as the next natural progression to his cause.

“While I was hiking, I kept thinking ‘what’s next?’ From that, I decided to establish a non-profit which is just about complete,” he said. “Then I starting thinking about biking and that’s how this came about.”

Working 75-plus hours per week over the past year to gear up financially, Shelby, 44, said the support from his employer, friends and family has been tremendous as he prepares for the journey. Choosing not to stay in hotels, he will be camping each night along the way.

The bicycle he will be riding is custom made and was donated particularly for this trip by Klaus Volkmann, an expert in bamboo bicycle craftsmanship from Porto Alegre, Brazil. While several bicyclists have crossed the United States on standard diamond frame bikes made of wood, no one has succeeded, let alone attempted, crossing on a wooden recumbent.

“The bike gets a lot of attention,” Shelby said. “I have people stop and talk to me all the time and that’s great. I can talk about the bike and then let them know what I am doing. I have cards that I hand out as well, directing people to my blog and website if they want more information.”

According to Shelby, the issue of human trafficking has been an increasingly important social and legal issue not only worldwide, but right here in the United States as well. Over 20 million people in the world are victims of human trafficking, also known as modern day slavery, with more than 250,000 of those cases being located in the U.S. Close to 20,000 others are foreign nationals who are trafficked into the U.S. Eighty percent are women and children, and of those, 70 percent are trafficked into the commercial sex trade.

“By pushing myself mentally and physically like this, while attempting something a little outrageous, I hope to make a difference in the lives of those that need our help. What I am doing to bring about awareness is not hard compared to what I have seen,” Shelby said. “The smiles of the women and children that I have seen being rehabilitated keep me motivated; I have to keep going.”

All funds raised directly benefit organizations that assist victims of human trafficking. For further information or to make a donation, please contact Dug Shelby directly via email at oasisproject@gmail.com. To follow along on his cross country bicycle trip, visit his blog/website at http://tr4f.wordpress.com.