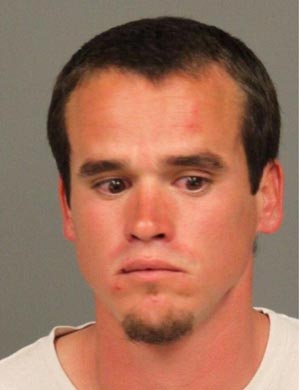 A 30-year-old from Paso Robles was arrested Friday night for prowling and peeping into a home in San Luis Obispo. On March 28, 2014 at about 9:19 p.m., San Luis Obispo police officers were dispatched to a suspicious subject in the 1100 block of Seaward Street.

Several officers arrived in the area and began to search for the subject. One of the officers observed Timothy Kasinger standing on private property in front of a living room window of a residence, according to a report from the San Luis Obispo Police Department. The window was open and the screen was partially removed. Timothy Kasinger ducked down behind a hedge and tried to hide when he spotted the vehicles head lights, the report says.

Kasinger was contacted and questioned by police and the investigation revealed that he did not live at the residence, nor have permission to be there. Kasinger was arrested for prowling and peeping in a residence. The investigation is ongoing to determine if there are additional victims. Residences are asked to notify the police department if they have any information that would assistant in this investigation.