The Paso Robles Police Department held an “AVOID the 14” DUI/CDL traffic enforcement checkpoint on Saturday, December 28, 2013 from 7 p.m.. to 11 p.m.. in the 1300 block of Spring Street in the City of Paso Robles.

Paso Robles Police Department announced the location of its DUI checkpoint. It will be held on Spring Street at 13th Street on Saturday, Dec. 28 from 6 p.m. to 2 a.m. 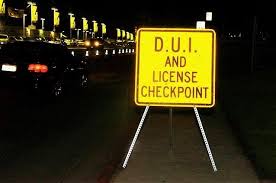 Fourteen area law enforcement agencies have teamed up once again this holiday season for an “Avoid the 14” campaign to increase enforcement of drunk driving, according to a joint statement from Officer Robert Cudworth with the San Luis Obispo Police Department.

The winter holiday crackdown on motorists driving under the influence (DUI) has resulted in a significant number of  arrests from local routine traffic enforcement and special “Avoid the 14” DUI checkpoints since it began in San Luis Obispo County.

The campaign runs from Dec. 13 to Jan. 1, and already police have arrested 59 individuals for driving under the influence of alcohol or drugs. In 2012, 60 DUI arrests occurred during the same 10-day time period.

Over the course of the next week of the campaign a DUI checkpoint will be held in Paso Robles with extra DUI
Saturation Patrols will be deployed by State Parks.

The Paso Robles Police Department will hold a check point in the city limits on Saturday, Dec. 28, 2013. The exact location of the checkpoint was not announced.

“We do not release the location of these planned events until the day of the operation,” says Paso Robles Police Lt. Tim Murphy. There will be a follow-up press release on Saturday, he said. Check back to this story for an update on Saturday.

Funding for this program is provided by a grant from the California Office of Traffic Safety, through the National Highway Traffic Safety Administration. DUI arrest data collection will continue through New Year’s Weekend, midnight Sunday, Jan. 1, 2014.