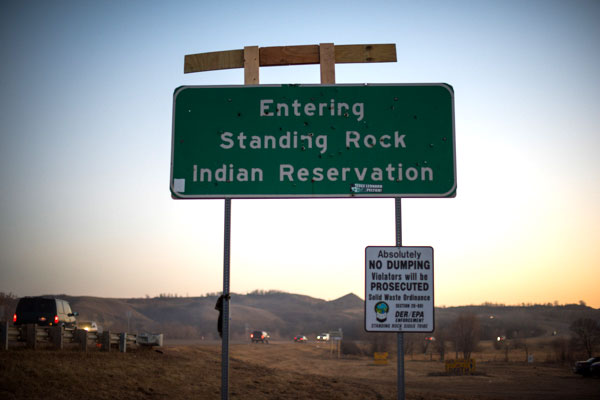 —Dozens of celebrities including Leonardo DiCaprio, Shailene Woodley, Lenny Kravitz, Neil Young, Ben Affleck and Mark Ruffalo have come out on behalf of  protestors at Standing Rock. Likewise, dozens of local residents of San Luis Obispo County have traveled to North Dakota to join thousands who are opposed to the construction of the Dakota Access Pipeline or “black snake” because, they say, it threatens the ecological stability of the region.

The protestors for months have withstood continuous pressure from the Morton County Sheriff’s Department under the leadership of Sheriff Kyle Kirchmeier, and the National Guard.

“I’m exhausted…This is not about a pipeline or technology, it’s about people coming together from all backgrounds for a life we can all be part of,” says Atascadero resident Erin Inglish, who has just returned from Standing Rock. “Traveling to Standing Rock was the most inspiring experience of my 30 years on the planet.”

Inglish, who is a mechanical engineer and a singer-songwriter, loaded up her RV with donated supplies and drove 1,600 miles with her friend Brittany App to join an estimated 12,000 people now camped out in the pipeline conflict zone. They handed over propane, solar panels, winter clothing, head lamps, batteries, food and warm socks to the Standing Rock campers, all donated by dozens of San Luis Obispo residents who either attended a November fundraiser in Atascadero or were friends, or friends of friends.

“I’ve worked in resource management, building and designing structures for energy efficiency,” Inglish says. “That was the skill set I took with me to Standing Rock, to help with the winterization of the campers’ quarters.”

Native Americans and their supporters are living in teepees, wigwams, trailers, RVs, barns and tents, Inglish said. “My major focus was to help them prepare for a really harsh winter.” 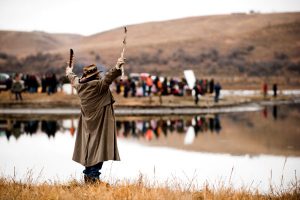 Photos by Brittany App taken at Standing Rock the last week of November 2016. 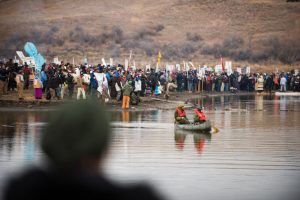 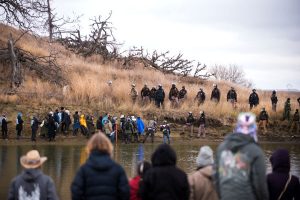 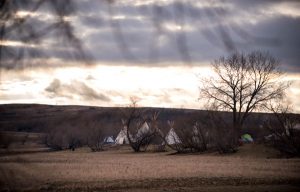 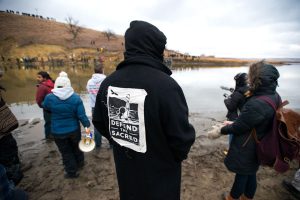 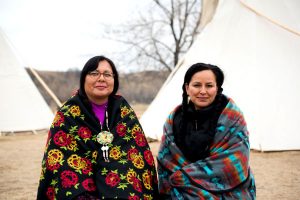 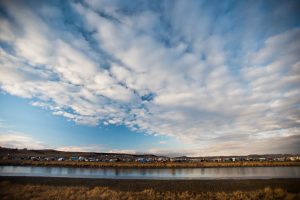 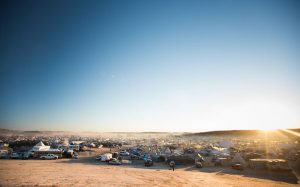 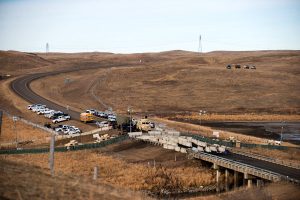 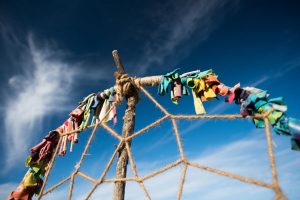 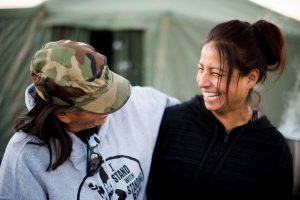 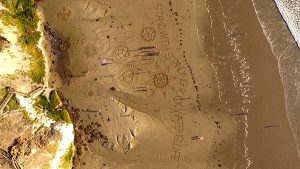 Brittany Anzel App, a local photographer and filmmaker who went to Morro Bay High School, is making a documentary film titled “Where There Once Was Water.” Speaking by phone on the road traveling back from Standing Rock, she said, “I really wanted to go and lend my skills to the movement and find out what was happening on the ground with my own eyes. Primarily I had been hearing about Standing Rock on Facebook. There wasn’t for the longest time any mention in the corporate news, and when they did it seemed like a one-sided story, on the side of law enforcement. I would like to stand up for clean water. How do we create a future in which there is clean water for all life?” 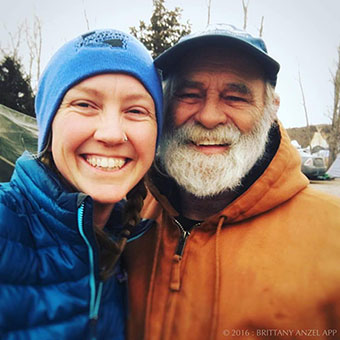 A selfie by Brittany App with Alabama photographer John Wathen at Standing Rock.

App says she photographed and interviewed a number of protestors for her documentary. She was also inspired by a man named John Wathen, a photographer and Vietnam veteran from Alabama, who told her, “North Dakota is the most lawless state I have ever seen,” comparing the situation to the ‘60s and saw how Alabama state troopers treated civil rights activists known as the Freedom Riders.

Protestors say if the pipeline leaked oil, it could potentially bleed into the Missouri River, poisoning the water supply for 18 million people. The American Civil Liberties Union is supporting protestors, who, according to the ACLU, “are defending the land and water using little more than the right to assemble and speak freely – a protection afforded by the U.S. Constitution.”

The ACLU has reported as many as 76 law enforcement agencies gathered near Standing Rock to stifle the protestors.

The pipeline would carry oil from North Dakota to Illinois, and would cross both government and private land. Protesters say that the construction would disrupt sacred sites.

On Nov. 30, North Dakota Republican Sen. John Hoeven spoke out against the Obama Administration and the protestors, insisting that “the pipeline is already 98-percent complete in North Dakota, and 86-percent finished overall,” according to a Huffington Post report. “It’s past time to get this issue resolved,” Hoeven said.

On Mon., Nov. 28, North Dakota Governor Jack Dalrymple ordered mandatory eviction of the Standing Rock protestors. The U.S. Army Corps of Engineers had previously announced plans to remove protestors from the pipeline conflict zone by Mon., Dec. 5. While no forcible evictions are expected, on Nov. 30, the Morton County Sheriff’s Dept. announced it would impose a $1,000 fine on those bringing food and supplies to Standing Rock.

“What’s most prevalent is psychological warfare, intimidations, threats,” says Erin Inglish. But what the mainstream media is missing, she reports, is the overwhelming atmosphere of peace and prayer among the protestors. “Every morning there is a prayer. It’s so peaceful. Any media that’s portraying the violence isn’t seeing that. The Morton County sheriffs are standing on the mountains and they have huge football-stadium lights pointed at the camp, they have helicopters and planes flying over the camp day and night. Most of it is just psychological intimidation.”

Those interviewed for this story predict that law enforcement won’t come in shooting protestors with live ammunition, nor can they arrest 12,000 people. “The Lakota are not going to back down,” Ingish says. “They have been victims of persecution and genocide for 500 years and they are not backing down. Don’t think that a letter from the Army Corps and 400 pipeline flunkeys are going to stop this.”

Another local resident who has just returned from Standing Rock is Roberto Monge, a software engineer and community activist with the alternative school Outside Now in San Luis Obispo. “A lot of Outside Now teachings,” he says, “are based on indigenous teachings, especially of the Lakota Sioux, so for me to go to Standing Rock felt like a reciprocity thing. We’ve learned a lot from them and they were calling for help.” 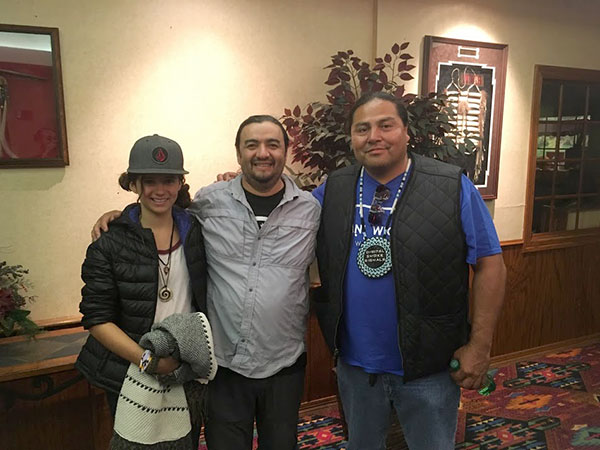 Monge went with his 12-year-old daughter, Liliana. “One of the reasons I went,” he says, “was to show her something real…The youth started the whole thing [at Standing Rock]; it began with a group of 10 of them and grew to more than 10,000 this weekend. Whenever there was a decision to be made, the elders said ‘let’s talk to the youth council.’ So youth are highly esteemed in indigenous culture.”

Monge said that since October he has been aware of at least six caravans that have left the county headed for Standing Rock.

It is unclear what will happen next in the confrontation between government and corporate forces, and those protesting the Dakota Access Pipeline. “The State of North Dakoka and especially the governor is such a wild card,” Monge says. “Racism abounds—some people call it the South of the North. The military crackdown is something you don’t expect in 2016…This feels like the 1960s.”

Inglish, App and Monge seem of a mind that the epic struggle between the “water protectors” and the police and government officials is universal. Monge says it makes sense that San Luis Obispo County locals would relate to Standing Rock. “Look at the leak that just happened in Goleta…We have off-shore drilling, fracking in Price Canyon. Water is sacred and it’s at the core of this.”

Says Inglish, “This is not about a pipeline. To me, this is about the civil and environmental [rights] movement, it’s about indigenous rights and the reconciliation movement. This is the movement of our century.”