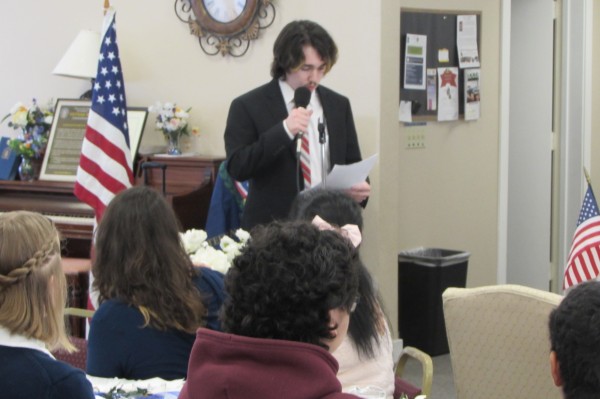 All three students will advance to state level competition

–Three students from North County schools have won the history essay contests for the Daughters of the American Revolution (DAR) California District 7. The students, Michael Lofton, Juan Farias and John Nicholson were honored with certificates of recognition and $50 checks at the DAR George Washington Tea on Saturday. The tea is an annual event for the local El Paso de Robles chapter of the DAR.

Michael Lofton, a Templeton High School senior, read his winning essay “Columbus and Lindberg: A Journey Across the Atlantic.” Juan Farias, an eight grader from Cappy Culver School read his essay, “A Colonial Family’s Reaction to the Stamp Act.” John Nicholson, sixth grade from Templeton MIddle School, was unable to attend the tea. His sister, Karen, read his essay in his place, also titled, “A Colonial Family’s Reaction to the Stamp Act.” Nicholson also won the district competition last year as a fifth grader. 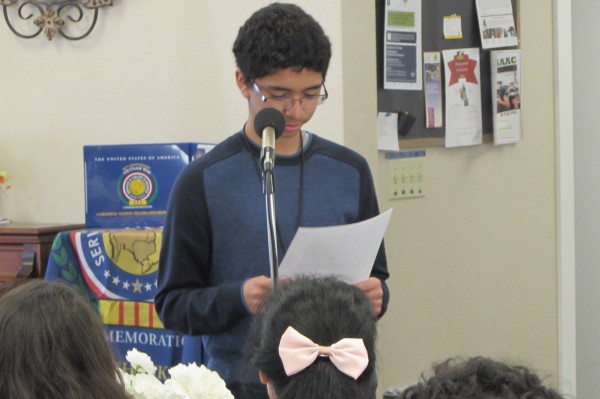 The DAR District 7 covers California from Simi Valley to Paso Robles and includes eight chapters. All three of the winning essays have been entered in the state competition. State winners go on to the national competition. 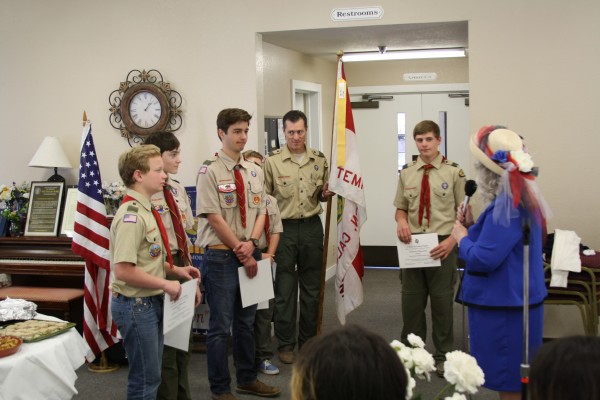 The George Washington Tea is an annual event recognizing community youth and DAR members for their service. This year Melanie Coppen of Templeton was presented with a certificate of recognition for her 20 years of membership. New members, Marilyn Hamilton from Paso Robles, Antonia Stelloh from Paso Robles, and Lorna Whiteaker from Grover Beach were inducted into the DAR.

The DAR is a service organization founded in 1890 for historical preservation, promotion of education, and encouragement of patriotic endeavor. The organization sponsors history school essay contests throughout the school year as part of the educational outreach projects. Cohen said that the local DAR chapter represents a very large area. “Our chapter covers from the Cuesta Grade to Southern Monterey County, including Bradley, Lockwood and surrounding areas in the north; from the Cambria and Pacific coast on the West to Parkfield, Shandon, Pozo and Santa Margarita on the East.”