The unemployment rate in the Paso Robles-San Luis Obispo region was 6.9 percent in July 2013, according to the State of California Employment Development Department. That’s below the year-ago estimate of 8.6 percent, but up slightly from a revised 6.4 percent in June 2013. This compares with an unadjusted unemployment rate of 9.3 percent for California and 7.7 percent for the nation during the same period.

San Luis Obispo County saw a 2.5 percent increase in job ads as compared to the same 120-day period from the previous year. By comparison, California’s year-over increase for all occupations was 9.2 percent. Santa Barbara County saw a 13.8 percent decrease in job ads for the year-over comparison; however, bright spots in Santa Barbara County, as measured by the highest number of current job ads, include web developers, registered nurses, and retail salespersons. The following table arrays in-demand occupations alphabetically within three educational levels and highlights noteworthy totals. 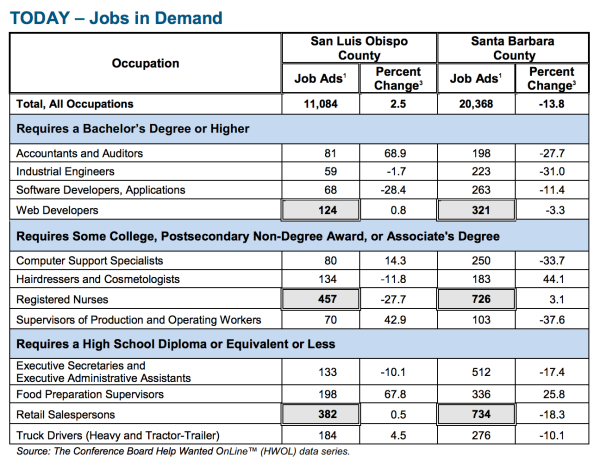