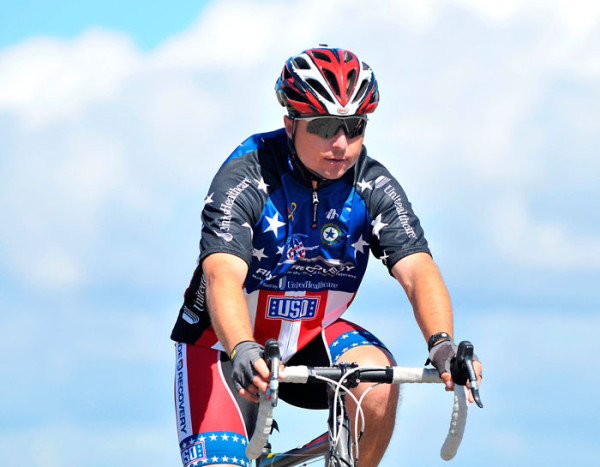 PASO ROBLES – Lending support to our country’s wounded warriors – that’s what Paso Robles’ Bob Rollins, a retired Army Commander Sergeant Major with a 27-year military career, is doing next month as he rides his bike from Palo Alto, just outside of San Francisco, to Santa Monica as part of the Ride 2 Recovery program.

Rollins became involved with the program after a chance encounter in 2010 when, after bringing gear to a friend that was cycling through San Simeon as part of the event, he met a young soldier that had lost both of his legs to an Improvised Explosive Device (IED) while serving in Iraq.

“He just had such a positive outlook and he worked so hard,” Rollins said. “He did not let his injuries modify who he was as a person. He overcame an obstacle and figured out how to live life in spite of having lost his legs. When he rolled up on his modified bicycle and asked why I wasn’t doing the ride, I didn’t know what to say except ‘Next year I will.’ And I have been doing the ride ever since.” 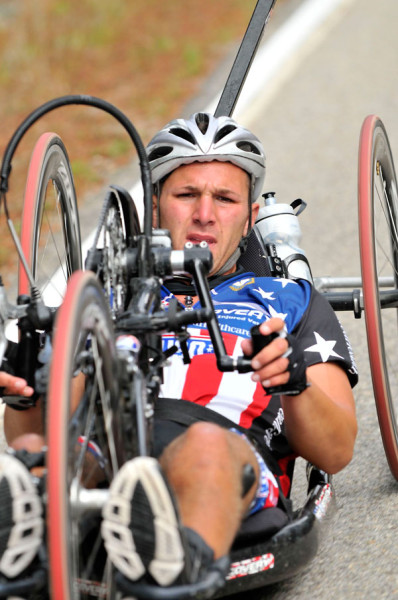 A young wounded soldier who was paralyzed from the waste down and rode the entire ride on a hand crank bike that was made for him by Ride 2 Recover.

Ride 2 Recovery, a 472 mile bicycling trek taking place Oct. 13-19, is produced by Fitness Challenge, a (501C3) non-profit, in partnership with the Military and VA Volunteer Service Office to benefit mental and physical rehabilitation programs for our country’s wounded veterans and healing heroes that features cycling as the core activity. Held in partnership with the Fitness Challenge Foundation, Ride 2 Recovery raises money to support cycling programs at military and VA locations around the United States to help healing heroes overcome obstacles they face.

Of the event’s approximately 200 bike riders, Rollins said 50-75 percent are wounded warriors in one capacity or another.

“Some wounds are obvious and some are not,” Rollins said. “They may have a traumatic brain injury (TBI), post traumatic stress disorder (PTSD) or something more apparent. The ride unfolds over several days and gives the warriors an opportunity to be around someone who understands; the support is fantastic and everyone has the chance to share what they’ve been through and what’s been going on in their lives.”

The wounded warriors ride alongside other race participants that have raised funds through their sponsorship drives. Locally, Rollins, an indoor cycling instructor and member of the Paso Robles Planning Commission, has seen an outpouring of support come his way as he partners with Kennedy Club Fitness in Paso Robles as the club hosts a silent auction in their lobby Sept. 2-14. Kennedy Club Fitness is also sponsoring a 2-hour indoor cycling class with all donations going to Ride 2 Recovery.

“When I was speaking with Barb Kennedy in 2011 about Ride 2 Recovery, she asked how Kennedy Club Fitness might be able to help,” Rollins said. “Matt McClish, the general manager at the Paso club, suggested a silent auction; it worked out well so we continue to do it.”

Rollins said he has been “truly overwhelmed” by the support he has received by local individuals and business owners that have donated to the silent auction. With items ranging from wine baskets, an overnight stay at a local bed and breakfast, auto repairs and even a four-person helicopter ride, there are plenty of reasons to get down to Kennedy Club Fitness, put in a bid or two and help Rollins raise funds toward his $3,000 goal.

“I have had just a tremendous response from local individuals and businesses,” Rollins said. “There are so many that have really stepped up to help. I appreciate the support everyone is showing to me and to the cause that they are supporting; the beneficiaries are our country’s heroes.”

For those interested in donating goods or services to the silent auction, contact Rollins at (805) 712-7729 or via e-mail at Brollins@charter.net. All donors will receive advertising on the silent auction tables and businesses may have their company logo be part of a continuous loop video that will be played in the Kennedy Club Fitness lobby.

For more information on Ride 2 Recovery, including the route the riders will take along Highway 1, visit www.ride2recovery.com. Donations to Rollins may also be made on the website under his name.