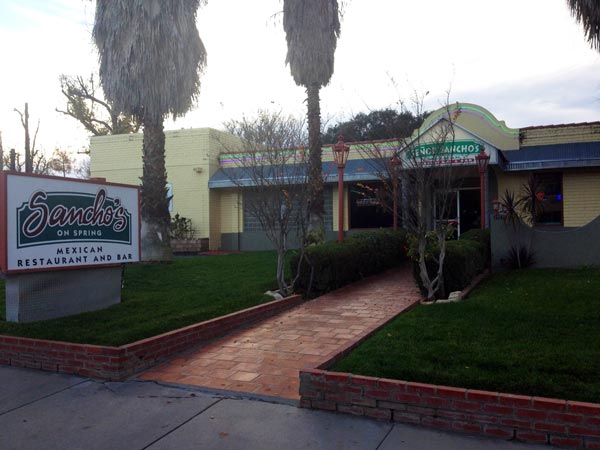 Sanchos on Spring is closed for business

The original location of Senor Sanchos, rebranded in 2013 as Sanchos on Spring at 2927 Spring St., closed its doors for good this weekend. The iconic Paso Robles Mexican restaurant had a nearly 25-year run on the north end of town. It was a town standard for Mexican-American food, serving chips and salsa, giant combination plates with refried beans and Spanish rice, and large frosty margaritas.

The restaurant served its last Sunday brunch this week and closed up at 2 p.m. “Due to the economic slow down, I have had to close Sancho’s on Spring,” wrote owner Marianne Leyva in a note posted on the door.

The closure doesn’t effect Senor Sanchos at 1902 Creston Road. That location, opened in 1997, is owned by her ex-husband Carlos Leyva, who retained the name Senor Sanchos after the couple split the business in 2013. Marianne continued running the original location as Sanchos on Spring.

Marianne said it was hard to tell her 24 employees about the closing. “We all hugged and cried a lot,” she said. “I want my customers to know how much I will miss them. The best thing about the restaurant was being there and interacting with them. It would have been 25 years at this location in March,” she said. “I got to see generations of family eat and work her. Some of the children of my original staff grew and came to work her,” she said.

Realtor Chris Bausch of Berkshire Hathaway Home Services posted a large for sale sign on the property today. The restaurant was a victim of the economy, he said. “The Great Recession has not been kind to her,” he said. “The return on investment wasn’t what it needed to be to support the business.”

“She feels very bad for her employees, and that she couldn’t have more time to say goodbye to her customers,” Bausch said.

As for Marianne, “I’m going to be looking for a job,” she said.