Paso Robles News|Thursday, May 6, 2021
You are here: Home » Paso Robles History » Looking Back: Don’t pick a fight unless you’re bigger than the other guy

Looking Back: Don’t pick a fight unless you’re bigger than the other guy 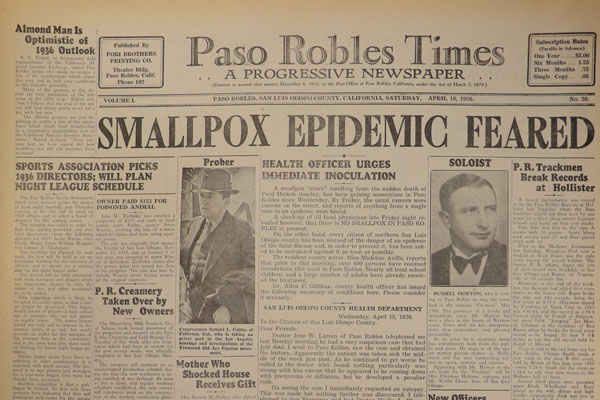 Moral: Don’t pick a fight unless you’re bigger than the other guy or able to dodge his aim

–A.J. Sneed, contractor, was released on $500 bail Wednesday after he appeared in local justice court to admit a charge of assault and battery, and his victim, Herbert A. Potter, is awaiting the diagnosis of x-ray photographs to determine whether or not he has suffered a fractured skull from the melee.

According to local authorities, the first indication they received of any trouble, was on Wednesday afternoon when Potter appeared before Justice of the Peace George E. Spicer and asked that he be allowed to swear out a warrant for Sneed’s arrest. He said then, that Sneed had attacked him, but somewhat dazed, he was unable to give further details. He was unable to sign his name to the complaint.

Noticing a large abrasion on his forehead, and a rather severe cut over his right ear, Judge Spicer sent the man across the street for medical attention. Constable Trager was notified by the physician, who recommended that Potter be taken to the county hospital.

Upon Trager’s arrival, Potter seemed to lose his memory completely. He insisted that he had not been hit, that he had never seen Judge Spicer before. He was taken to the hospital immediately and kept there until late Thursday. Although apparently sound otherwise, the elderly man is still somewhat dazed with regard to the accident, authorities declare.

Sneed was taken into custody Wednesday. He readily admitted having hit Potter “with the first thing handy,” — he wasn’t quite sure what. He said, however that Potter had provoked the attack, and that he had been told to stay away from the Capitol Hill tract, where Sneed is working. It was apparent to him and to other witnesses that Potter had gone there Wednesday for the sole purpose of picking a fight.

Potter is reported to have asked police chief Azbell some days ago what would happen if he were to “beat up” Sneed. Azbell’s answer was not learned.

This “Looking Back” view at Paso Robles history comes from one of the hundreds of local newspapers in the Paso Robles Area Historical Society collection. Several local newspapers, dating from the 1800s, have reported on local, national and world events, providing priceless historical views of our community that are not available from any other source. The Historical Society is seeking community support for the multi-phased Newspaper Preservation Project to help fund the transfer of these aged and fragile pages to microfilm and digital images.

The museum has been closed due to COVID-19, but the society is planning a grand opening around the middle of April. In the meantime, those interested in historical research can make an appointment by visiting the website’s Research page or by calling (805) 238-4996