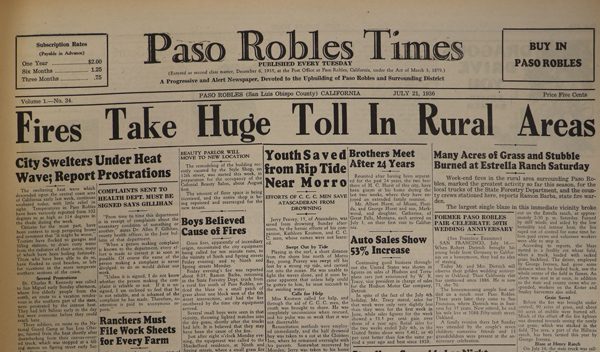 Many Acres of Grass and Stubble Burned at Estrella Ranch Saturday

The largest single blaze in this immediate vicinity broke out on Estrella Ranch, at approximately 2:30 p.m. Saturday. Fanned by stiff winds, and aided by the low humidity and intense heat, the fire raged out of control for some time before paid crews and volunteer workers were able to stop it.

According to reports, the blaze started in a freshly cut wheat field, when a truck, loaded with sacked grain backfired. The driver, employed by George Iversen, had gone some distance when he looked back, saw the whole center of the field in flames. An alarm was sent in at once, in addition to the state and county crews who responded, workers on the Kester and Smiley harvesters also aided.

Before the fire was brought under control, 90 acres of grass and about 60 acres of stubble were burned off. Much of the effort of the firefighters was directed towards saving the newly cut grain, which was stacked in the field. The area, a part of the Hillman ranch, has been farmed this year by George Iversen.

On July 16, the state truck was called to the E.G. Register ranch, four miles north, where a 3-acre grass fire was brought under control. A similar fire was reported about 9 a.m. Saturday, at the K. Henry ranch, south of Paso Robles, and stopped after it had burned about 3 acres.

About 3:30 p.m. Monday, Barba was called to the Brill and Carlson ranch, east of Atascadero on Creston road. Here, ten acres of grass, about six acres of standing grain, and a barn stocked with 140 tons of hay were destroyed before the blaze could be brought under control. Damage was estimated a $1,600. The origin of the fire was unknown.

Also started from unknown causes, was the fire which destroyed a large hay barn on the Reg Freeman property, Estrealla, early Tuesday morning. The blaze was reported in Paso Robles at 1 a.m., and had progressed beyond control by the time equipment could be rushed to the scene. Damage was estimated at $1,000.