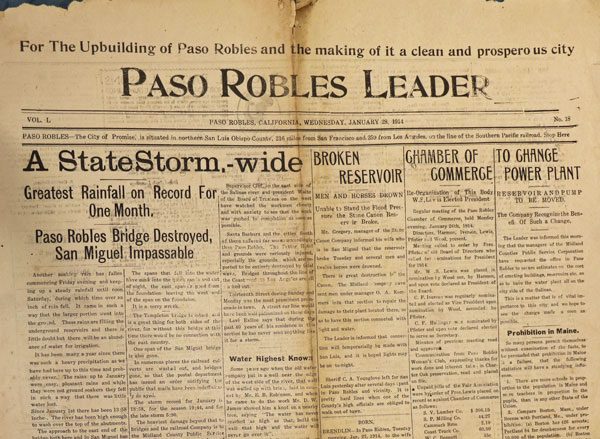 Another soaking of rain has fallen commencing Friday evening and keeping up a steady rainfall until Saturday during which time over an inch of rain fell. It came in such a way that the larger portion went into the ground. These rains are filling the underground reservoirs and there is little doubt but there will be an abundance of water for irrigation.

It has been many a year since there was such a heavy precipitation as we have had here up to this time and probably never. The rains up to January were easy, pleasant rains and while they were not ground soakers they fell in such a way that there was little water lost.

Since January there have been 13:58 inches. The river has been high enough to wash over the top of the abutments.

The approach to the east end of the bridge both here and in San Miguel has been washed away, and some miles of railway track between here and Templeton washed out. The “Lark” the Southern Pacific fast train was stalled at San Miguel and could go neither way.

The damage to the railroad is very great and it will probably be some days before trains can pass from San Francisco to Los Angeles.

Much of the land in this section that has been plowed is badly washed and will need to be re-seeded before a crop can be expected.

The above was put in type Saturday. Since that time about six inches of rain has fallen. The river has risen to a point higher than known for years. Sunday night about 6 p.m. a span of the Paso Robles bridge went out on the middle with a crash and later on the east span and another middle span leaving the west span intact and on solid foundation.

The spans that fell into the water have sunk into the quick sands and out of sight, the east span dropped from the foundation leaving the west end of the span on the foundation.

It is a sorry wreck.

The Templeton bridge is intact and is a great thing for both sides of the river, for without this bridge at this time there would be no connection with the east country.

One span of the San Miguel bridge is also gone.

In numerous places the railroad culverts are washed out, and bridges are gone, so that the postal department has issued an order notifying the public that mails have been indefinitely delayed.

The heaviest damage beyond that to bridges and the railroad Company is to the Midland County Public Service Company, but they put on a force of men so as to give Paso Robles water, as that was the greatest source of danger, both as to health, fire and inconvenience from other sources.