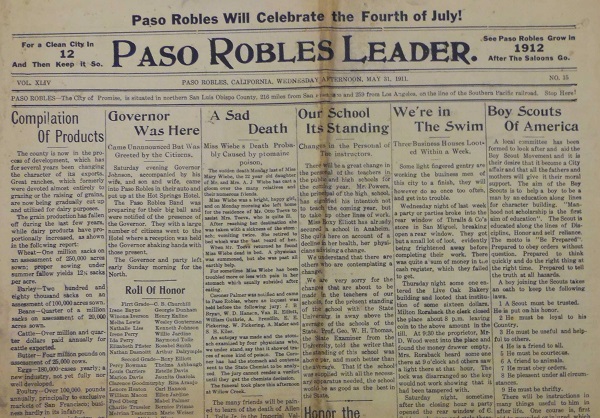 Click here to see the full front page of the May 31, 1911 Paso Robles Leader

Excerpts from the May 31, 1911 issue of the Paso Robles Leader

The county is now in the process of development, which has for several years been changing the character of its exports. Great ranches, which formerly were devoted almost entirely to grazing or the raising of grains, are now being gradually cut up and utilized for dairy purposes.

The grain production has fallen off during the last few years, while dairy products have proportionally increased, as shown in the following report:

Wheat – One million sacks on an assessment of 250,000 acres sown; proper sowing under summer fallow yields 12 ½ sacks per acre.

Barley – Two hundred and eighty thousand sacks on an assessment of 100,000 acres sown.

Beans – Quarter of a million sacks on assessment of 20,000 acres sown.

Poultry – Over 100,000 pounds annually, principally to exclusive markets of San Francisco; business hardly in its infancy.

Apples – A new industry on land which is now 1-8 the cost of that near larger cities; superb climate; no irrigation; fine, firm, juicy, well-keeping fruit; no scale nor blight; took 8 out of 10 prizes entered for at annual apple fair at Watsonville in 1910. Imperfect pack only lost the other two prizes; took world’s medal at St. Louis Exposition. About 750 acres now planted; average 200 pounds per tree at 2 cents per pound net.

More news of the day

Gus Herman a young and sturdy German who came here some three years ago. Was sent by a friend to care for a place he owned near Creston. Gus had but $65 when he reached Creston, but he went to work and soon he was making good at a financier as well as a good farmer.

This year he has put in large acreage to potatoes, that bids fare to produce 75 sacks to the acre. He was told that he could not grow spuds there but the man thought different.

He further says that one more crop and he will away to Germany for a wife.

This “Looking Back” view at Paso Robles history comes from one of the hundreds of local newspapers in the Paso Robles Area Historical Society collection. Several local newspapers, dating from the 1800s, have reported on local, national, and world events, providing priceless historical views of our community that are not available from any other source. The Historical Society is seeking community support for the multi-phased Newspaper Preservation Project to help fund the transfer of these aged and fragile pages to microfilm and digital images.