Looking Back: Pioneer Day Celebration in 1936 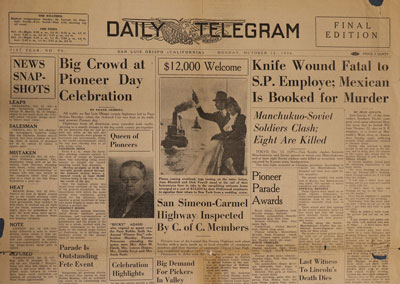 All traffic on San Luis Obispo County highways led to Paso Robles Monday when the Almond City was host at its sixth and greatest Pioneer day.

Highways from all directions were crowded with traffic, moving in a steady stream to the big north county get-together.

On the pavement was car just behind car, while on the soft dirt beside the concrete were groups of horsemen and horsewomen, riding to the varied entertainment, which the city was offering free to all who would come.

From 9 a.m. when the horseshoe pitching contests opened, to the close of the events at sundown, there was something doing every minute to delight the record-breaking crowd that attended.

Moving promptly at 10:30 the two-mile parade passed through the business section before a massed crowd, at least 20,000 visitors being in the city to view the events of the day.

Only the highest praise was heard from everyone on the work of the general committee, for the smoothness with which the many events were conducted, giving credit for the efficiency which handled a great multitude of large and small details to make the celebration a perfect one.

Gene Booth, general chairman, Jared Brush, assistant general chairman, and representatives of civic, fraternal and patriotic organizations, and the people of the city as a whole, worked with the utmost enthusiasm to be perfect hosts to the central coast section of California, in a striking and brilliant review of the pioneer days of the section.

With many brightly uniformed bands with beautiful floats, gaily dressed marching units, and with horsemen and horsewomen in gaudy “chaps”, brilliant-hued shirts and bandana, overalls and boots and smart modern riding costumes, between each division, the parade was highly interesting.

Following the grand marshal, Henry Ramage, and his two aides Mrs. Lucy Brown and Peter Daniels, was the pageant of the Flags, showing the 12 different banners which have flown over California in its history.

Beginning with the Royal Flag of King Ferdinand, the banners told in color the varying rulers of the land, to the 48 Star-Spangled Banner of today, riders in the costume of the period carried the banners, gifts of the Automobile Club of Southern California.

Noticeable among the many entries were the pioneer day blacksmith shop, complete with hand-worked bellows and forge, the entry of the Simmler farm center, in the community division.

Another float reflecting the gay and dangerous early days, was the San Miguel community entry, which showed the famous bandit, Joaquin Murietta and his band, when they were resting in hiding near San Miguel in 1852.

Schools, too, showed the historic influence in their entries. Paso Robles Jr. high offered a scene at the Rancho Grande, with gaily dressed senors and senoritas on the terrace of an adobe ranch house.
Cholame School offered an Indian scene, the truck covered with real Indian blankets and with pupils of the school and braves…

In the old vehicle section a 1905 Auburn, and early day Reo and a pioneer Model T Ford attracted much attention.

Whiskered men, all over the place, with whiskers all over the face, added to the pioneer atmosphere of the celebration.

J and R Almond Ranches had an almond grader in operation on a float, with a group of young women, labelled “The Nut Gang,” throwing almonds to the crowd.

Two girls in bright scarlet jackets and white trousers of satin carried the banner ahead of the Taft Union high school band, of 50 musicians in military uniforms of two shade of blue.

Efficiency in “dishing out” the ton of free stew prepared by Roy Cammack and his committee came in for much praise by thousands of visitors.

A huge Scotch longhorn steer, and a Mexican longhorn, led in the parade by cowboys from Cholame ranch, caused some of the spectators to draw back from the procession as the animals passed.

As usual, the Standard Oil announcer car was on the job, acting for the committee in telling the crowd all about it.

Promptly at noon, Gene Booth, general chairman, announced through the loudspeakers that the combined the bands would play “The Star Spangled Banner” as a tribute to the pioneers who are gone, and the crowd stood at attention, the men with bared heads and the women with hands over hearts as the national anthem was played.

This “Looking Back” view at Paso Robles history comes from one of hundreds of local newspapers in the Paso Robles Area Historical Society collection. At least 18 local newspapers, dating from the 1800s, have reported on local, national and world events, providing priceless historical views of our community that are not available from any other source. The Historical Society is seeking community support for the multi-phased Newspaper Preservation Project to help fund the transfer of these aged and fragile pages to microfilm and digital images. See the society website for more information about becoming a member or donating to any phase of this project. The Paso Robles Daily News is pleased to support this important project. Watch this space for future “Looking Back” articles.