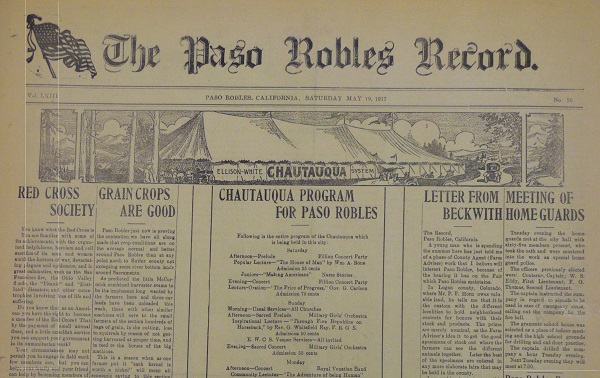 Click here to read the full front page of the Saturday, May 19, 1917 Paso Robles Record.

Excerpts from the Saturday, May 19, 1917 Paso Robles Record

Meeting of the Home Guards

Tuesday evening the home guards met at the city hall with sixty-five members present, who took the oath and were mustered into the work as special home guard police.

The captain instructed the company in regard to signals to be used in case of emergency cases, calling out the company by the fire bell.

The grammar schoolhouse was selected as a place of indoor meeting and the high school grounds for drilling and outdoor practice.

The captain drilled the company a hour Tuesday evening.

Next Tuesday evening they will meet at 7:30.

James A. Pierce received word the first of the week from his son Tracy, who has been an instructor of mathematics at Harvard University for the past year, saying that he had resigned his position and enlisted in the U.S. Army in company with three other teachers. He is stationed at the Plattsburg Barracks.

Lee Jamison and Walter Sykes left Tuesday by automobile for the Yosemite Valley. After spending several weeks sightseeing they expect to enlist in the navy.

Last week Mrs. E. Exline sold 100 pounds of Tepary beans, for which she received the sum of $20. There will be many of these beans planted as they average about six sacks to the acre and are easily grown.

This “Looking Back” view at Paso Robles history comes from one of the hundreds of local newspapers in the Paso Robles Area Historical Society collection. Several local newspapers, dating from the 1800s, have reported on local, national and world events, providing priceless historical views of our community that are not available from any other source. The Historical Society is seeking community support for the multi-phased Newspaper Preservation Project to help fund the transfer of these aged and fragile pages to microfilm and digital images.