Four flights daily will be scheduled

They refused to release details of service, saying an official press release for all media will be put in the mail this evening.

However, initial plans, announced previous to the first of two efforts by the city of San Luis Obispo to block the terminal switch from the airport there, called for two flights daily, north and south.

Final authorization of the change in terminals for service to the San Luis Obispo-Paso Robles area was handed down by a decision of the Civil Aeronautics Board in Washington, D.C., April 13th. 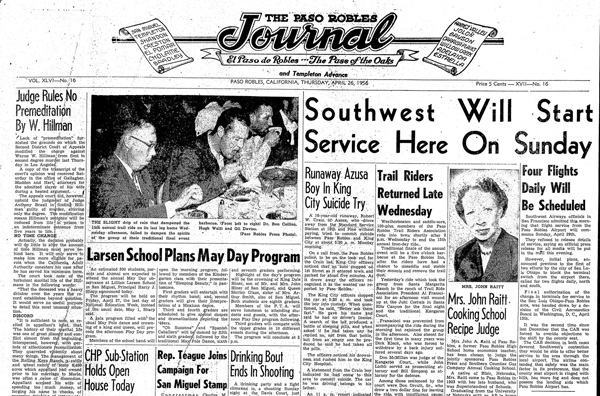 It was the second time since last December that CAB was forced to override objections to the shift by the county seat.

The CAB decision in both cases favored Southwest’s contention they would be able to offer better service to the area through the local airport. The airline contended that safety was the main factor in its preference, that the county seat airport was ringed with hills, has more fog and does not possess the landing aids that Paso Robles Airport has.

Whitney, who lives just a mile from the hospital, noticed a man dog-trotting across the field in front of his home.

He saw the man cross over to a truck lot and dodge between the trucks. Shortly he came out and started north on the highway toward Paso Robles

Suspicious of his actions, Whitney left his work and stopped the man just north of Kelly’s grocery. When asked for identification, the man produced an Atascadero Club Mineral Card. Whitney asked if he was a resident of Atascadero and the man answered that he was just passing through.

Whitney’s third question was, “Where did you get the card?” The man said someone had given it to him. Whitney took the man into custody and returned him to the hospital where he was identified as Louis Danien Hughes, 25.

Hughes was taken to San Luis Obispo and booked as an escapee from a state institution.

Elsewhere in the news

A soldier, John J. Shipley was arrested by Paso Robles Police after a 70-an-hour chase through town and was sentenced to 180 days in county jail, charged with two counts of drunk driving and car theft.