Looking Back: Sportsmen’s Club to wage campaign on killers of game birds 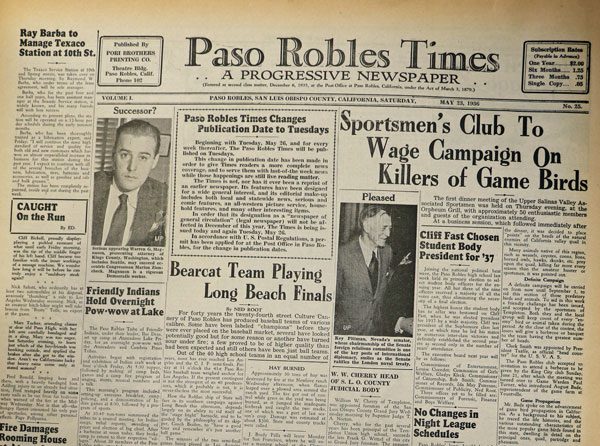 Click here to read the full front page of the May 23, 1936 Paso Robles Times.

–The first dinner meeting of the Upper Salinas Valley Associated Sportsmen was held on Thursday evening, at the Orpheum Grill, with approximately 50 enthusiastic members and guests of the organization attending.

At a business session, which followed immediately after the dinner, it was decided to place “points” on the heads of the natural enemies of California valley quail in this vicinity.

Many animals native to this region, such as weasels, coyotes, coons, lions, horned owls, hawks, skunks, etc. prey upon the quail, killing far more every season than the amateur hunter or sportsmen, it was pointed out.

A definite campaign will be carried on from now until September 1, to rid this section of those predatory birds and animals. To aid in this work a friendly challenge has been issued, and accepted by the sportsmen of Templeton. Both they and the local group will keep count of every “enemy” bird or animal taken during the period. At the close of the contest, the losers will give a barbecue or banquet to the team having the greatest number of heads.

Clark Smith was appointed by President Taaffe, as official “head counter” for the U.S.V.A.S.

The Paso Robles club accepted an invitation to attend a barbecue to be given by the King City club Sunday, June 21, after which the meeting was turned over to Game Warden Paul Turner, who introduced August Bade, superintendent of the game farm at Yountville.

Mr. Bade spoke on the advancement of game bird propagation in California as a background to his subject, he traced the life histories, and the various outstanding characteristics of the more popular game birds found in this state, dwelling in detail  on the principal ones, quail, partridge and pheasants.

Bade suggested that several “holding pens” be built and erected at various points throughout the Paso Robles district. Young birds, purchased from the game farm, would be placed in these pens immediately after they were received here, and while thus protected, would be fed until they were nearly grown, or better able to care for themselves. These pens, he said, if scattered through the area, would aid a better distribution of birds.

The next meeting will be held on June 18.

This “Looking Back” view at Paso Robles history comes from one of the hundreds of local newspapers in the Paso Robles Area Historical Society collection. Several local newspapers, dating from the 1800s, have reported on local, national, and world events, providing priceless historical views of our community that are not available from any other source. The Historical Society is seeking community support for the multi-phased Newspaper Preservation Project to help fund the transfer of these aged and fragile pages to microfilm and digital images.