Looking Back to 1936: Businessmen blame traffic enforcement for loss of tourist trade

Whether Paso Robles should discontinue its present “safety drive” was discussed pro and con, during what was probably the liveliest meeting of the City Council in several years, Monday evening.

A delegation of some twenty or more local business men attended the council session to argue that the employment of a special traffic officer was ruining their business, driving tourist trade away from Paso Robles, and generally giving the town a bad name. While some members of the delegation insisted the officer be dismissed for the welfare of the town, others declared they would be content if he would merely “use good judgment.”

The opinion of the council was divided on the matter, Mayor Liddle upholding the recent action of that body; Councilman Dougherty declaring that while he had originally favored the employment of a traffic officer, he was discouraged with the present setup, and willing to vote for a discontinuance. 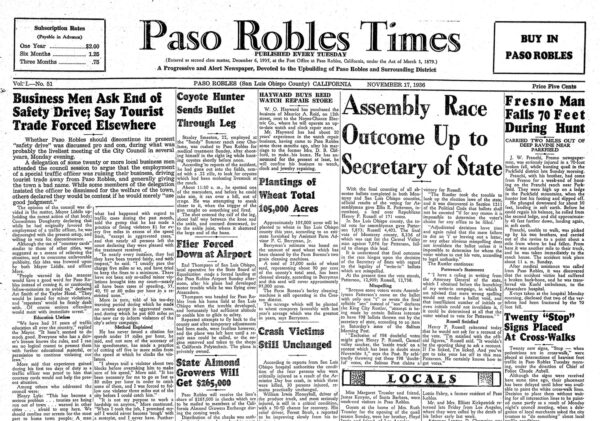 Although the use of “courtesy cards” similar to those of other cities, was suggested as a means of relieving the situation, and to overcome unfavorable publicity, this idea was frowned upon by both Mayor Liddle and officer More.

People warned in the manner would have a good word for Paso Robles instead of cussing it, or cautioning fellow-motorists to avoid us,” declared Art Smith of the Taylor Hotel. “They would be issued for minor violations, and ‘repeaters’ would be firmly dealt with. Of course serious offenders would met with immediate arrest.”

“We have had 25 years of traffic education all over the country,” replied the major. “It hasn’t seemed to do much good. Everyone who has a driver’s license knows the rules, and I can see no logical reason to present them with further educational material, or permission to continue violating our laws.”

More said that experience gained during his first ten days of duty as a traffic officer was proof to him that courtesy cards would not help the present situation.

Among others who addressed the council were:

Henry Lyle: “This has become a serious problem. Tourists are being run out of town, warned in other cities, afraid to stop here. We should confine our arrests for the most part to home town people. A man with good judgment could tell when a violation is serious.”

Nick Sahati: “As you know we avoid other hot towns, even go out of our way to do so. More is driving business away from Paso Robles. Every tourist who stops here spends some money, and by doing so he helps the entire town. We should not concentrate on the small infringement that doesn’t mean anything. There are enough ruffians who live right here to keep an officer busy. We don’t blame More, we like him he’s only doing what you fellows tell him to do. Tell him to throw away that little book he’s always reading, confine his attention to the really serious violations.”

Click here to read the rest of the comments from the public, which include a comment form Councilman Dougherty that “The officer almost wore out a good siren during his first week.”

Judge Biehl, asked to explain just what happened with regard to traffic cases during the past month, told the group that he has made a practice of fining violators $1 for every five miles in excess of the speed limit, “except in aggravated cases,” and that nearly all persons left the court declaring they were pleased with the treatment received.

“In nearly every instance, they feel they have been treated fairly, and with respect,” he said. “I usually pare the charge five miles or so, and have tried to keep the fines to a minimum. There have not been any so-called minor violations brought to my court. Nearly all have been cases of speeding, 35, 40, 50 or 60 miles per hour in a restricted zone.”

Office More explained that he “made a practice of cutting off five or more miles from the speed at which he clocks violators.”

“I always trail a violator for about two blocks before overtaking him to make sure of his speed.”

“It has been necessary for me to go as fast as 80 miles per hour in order to catch some of them.”

The council adjourned without taking action, except to announce that intersections will be signed within the next few days.