Looking Back to 1940: City purchases land for airport, county considers funding for improvements

Wide approval of the purchase was indicated in an opinion ballot taken at the time of the regular city election in April. Final action by the council was delayed until approval of the field was received from the Civil Aeronautics Authority.

Improvements by the CAA are expected to be made in the near future. Funds are being solicited by local organizations from the board of supervisors, and possibly other sources, for the construction of a hangar and other improvements. 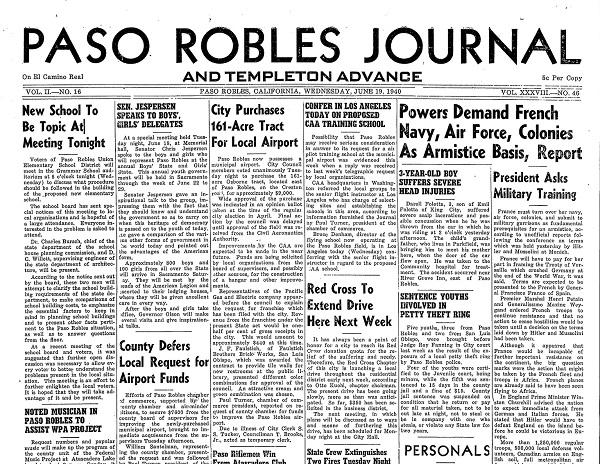 Representatives of the Pacific Gas and Electric company appeared before the council to explain the request for a franchise which has been filed with city. Revenue from the franchise under the present State act would be one-half percent of gross receipts in the city. This would amount to approximately $440 at this time.

J.F. Faulstich, of Faulstich Brothers Brick Works, San Luis Obispo, which was awarded the contract to provide tile walls for new restrooms at the public library, presented different color combinations for approval of the council. An attractive cream and green combination was chosen.

Paul Turner, chamber of commerce president, reported on request of county chamber for funds to improve the Paso Robles airport.

Efforts of Paso Robles chamber of commerce, supported by the county chamber and air-minded citizens, to secure $7600 from the county board of supervisors for improving the newly-purchased municipal airport, brought no immediate acquiescence from the supervisors Tuesday afternoon.

William Santelman, representing the county chamber, presented the request and was followed by Paul Turner, president of the Paso Robles chamber, and R.C. Heaton, who spoke in favor of the plan.

The funds are to be spent for grading and draining the field, surfacing the runways, and constructing a hangar. The local men pointed out that the fact that the field is on the commercial airline routes, is widely approved by pilots, and has the best percentage of flying days of any coast airport.

The supervisors stated that there would be no money available until November, and there might be legal difficulties in spending county money for permanent improvements on city property Supervisor Alfred Ferrini definitely opposed the project, stating that he believed that county money should be centered on the San Luis Obispo field. He added, that if Paso Robles was granted funds Cambria and other county towns were entitled to the same consideration.

The board promised to study the plan and a committee consisting of Supervisor Henry Twisselman, William Santelman and W.V. Ganan, president of the local Exchange club was appointed to confer with District Attorney A.H. Brazil on the legality of such action by the county board. This committee is to report at the July meeting.

Although the CAA will install lights, these further improvements are needed at the field, local air enthusiasts state. It is thought that such improvements would encourage the establishment of a pilot training school at the local field.

Steps to promote a government school at the Paso Robles airport were taken last week, when the city council and chamber of commerce and service clubs sent telegrams to President Roosevelt and national and western CAA chiefs urging such action.