Ronald Keith Nichols, 20, of Atascadero, escaped injury when his car struck a bank on Highway 466, three miles west of Atascadero, at 2:30 Saturday morning.

Nichols, according to the California Highway Patrol was eastbound when he lost control of the car on a sharp right curve, causing the vehicle to strike a culvert, then the bank, officers said a tire blew after the accident.

John Natho, 26, of Atascadero, received minor injuries when his car overturned in a driveway on El Camino Real, 655 feet north of Conejo Road at 7:10 p.m. Sunday. He is being treated at the Atascadero General Hospital.

Natho, according to the California Highway Patrol, was driving north, attempted to turn into the driveway at excessive speed, causing the car to slide in the soft sand and overturn. The vehicle was listed as a total loss. 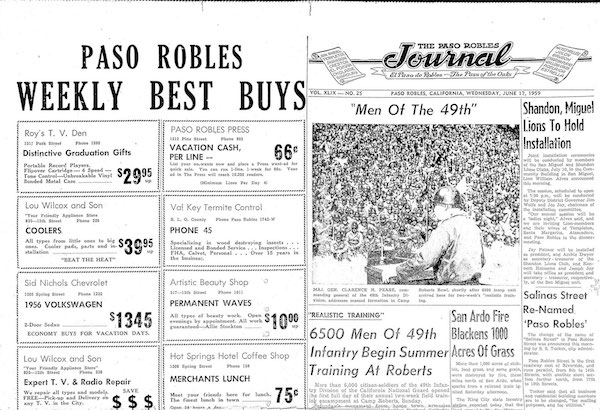 The construction zone on Highway 466, four and one-half miles west of Shandon was the scene of another traffic accident at 2:45 a.m. Sunday, but no injuries were reported.

Investigating officers of the California Highway Patrol said the driver, Norman Keith Groves, 20, of Atascadero, traveling east, came upon the construction zone, made a sharp right turn, and overturned his car.

Moderate damages were reported to the vehicle.

A two-car collision on Highway 101, just south of Gate Two at Camp Roberts at 3:35 Sunday afternoon resulted in major damages to one of the vehicles, but no injuries to the drivers.

According to the California Highway Patrol, a southbound car driven by Marc J. Zimmerman, 20, of Van Nuys, attempting to pass a car, pulled into the northbound lane before he noticed the approaching vehicle driven by Olga G. Peebles, 46, of Glendale.

Editorial comment: On the upside for the drivers of those vehicles, a 1958 Volvo could be had for $1749, or a 1956 Volkswagen could be purchased for $1345 from Sid Nichols Chevrolet.

On those drivers’ ways to, or from, the dealership, they could have popped into the Hot Springs Hotel Coffee Shop for a 75-cent lunch.

6500 men of the 49th Infantry begin summer training at Roberts

More than 6000 citizen-soldiers of the 49th Infantry Division of the California National Guard opened the first full day of their annual two-week field training encampment at Camp Roberts, Sunday.

Organic vehicles and commercial buses were used in the main, but more than 300 men and officers of northern Sacramento Valley’s 3rd BT, 184th Infantry, participated in a “first” in National Guard history by being air-lifted to Paso Robles airport from their home communities by Sacramento’s 314th Carrier Squadron, Air Force Reserve.

Sunday’s highlight was an orientation of the entire body of troops in the Camp Roberts Bowl by Gen. Pease who pointed up the significance of the 49th opening its training on Flag Day by reviewing the relative strengths of the Soviet bloc and the free world and emphasizing the need for an active, ready Reserve to “Keep our flag flying.”

Their training, he told the men, would be as realistic as possible with the purpose of “reducing to habit and routine as many of your functions as possible so as to free your conscious effort to surmounting the emergencies which arise on the battlefield.”

Outdoor church services for the entire Division followed on the parade ground, where the troops were broken up into eight groups before improvised altars set up on jeep hoods and truck backs.

Little more than 24 hours after taking leave of their families and civilian occupations the men of the 49th Division were engrossed in matters military — on the ranges, in the field and garrison — culminating in 48 armory drills throughout the year.

Reduced in strength from the 10,000 who encamped here four years ago to some 6500 as a result of reorganization along the more streamlined concepts dictated by the tactics of the nuclear age, the 49th Division is still one of the West’s largest reserve units, with an infantry company, artillery battery or special unit in most major communities throughout Northern California.