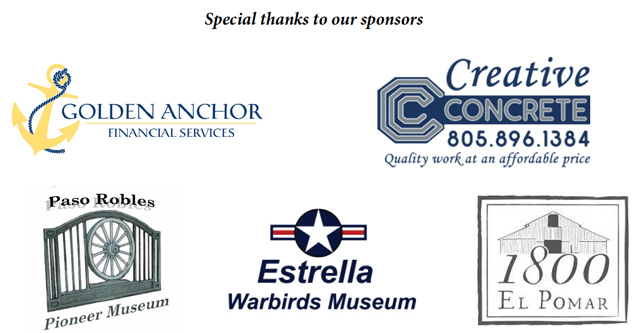 Ingrad Hansen, arrested on a charge of battery and the assault of A.E. Endsley, night clerk there, was fined $25 and given a sentence of 30 days in the county jail, after Judge Wm. Biehl had heard testimony from both sides of the case. The jail sentence was suspended for a period of a year, on the promise of the accused that he will refrain from further fighting or disturbing the peace.

According to Endsley, who appeared in court with a torn lip and badly bruised face, the altercation grew out of a complaint he made earlier in the day that there was no steam pressure. After breakfast, he said, Hansen, who is the engineer, insulted him, then grappled with him as he was leaving the dining room. They were separated by Joe Counce, a waiter. Some time after this, as Endlsley was sitting in the kitchen, Hansen entered and started a second fight.

In his own defense, Hansen told the court that he had been trying to avoid a fight. He admitted his remarks but claimed that they were not intended as an insult. Endsley he said, had threatened to beat him up, and his efforts were entirely defensive.

Gustaf Bernauer, excitable and with many gestures, testified in the engineer’s behalf. “It wasn’t much of a fight,” he said in broken English, “when a little fellow like me can stop a fight, it’s not much of a fight.” 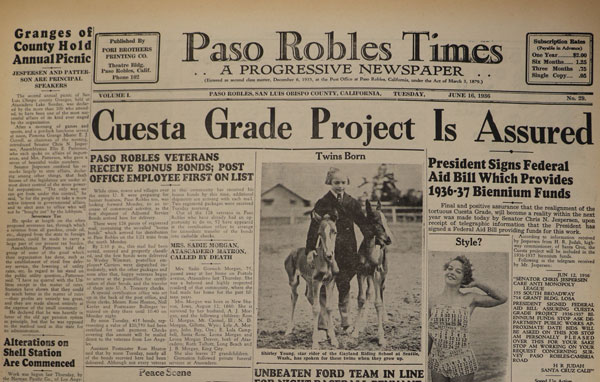 Click the image to read the full front page of the June 16, 1936, Paso Robles Times

Following the lead of the Shell, Barnsdall, and other major oil companies who have started drilling operations in San Luis Obispo County the Union Oil Company recorded leases on 3426 acres of land in the Ranchos Guadalupe and Bolsa de Chemisal.

Drilling will be started within the near future, according to L.M. Todd, superintendent of transportation of the Union Oil Co., with headquarters in San Luis Obispo.

Up to the present time, according to reports, the only oil in any quantity which has been located within the county has been in the southern part near the Santa Barbara County line. While there have been many wells drilled throughout the entire district, none of these ventures, except that of the Shell, near West Pleyto, have had sufficient backing to enable them to go much beyond 5000 feet.

The Shell Oil Company’s branch well No. 1, has been sunk to a depth of nearly 9000 feet, it is rumored that there are positive indications of an oil pool in that vicinity. It is said that the company will continue shortly with their original intention to drill a second well in that vicinity.

Geologists some years ago, after studying this area, declared that the fault on which the Elwood field, north of the Santa Barbara was developed, extended north-westerly to the east of Pismo Beach and Avila, and went into the sea at the southern end of Morro Bay.

Engineers also have declared that the oil seepage along the coast between Avila and Morro Bay does not come from tanker waste, but is due to seepage of oil from the floor of the ocean off this coast. There is much more oil apparent in the water that possibly could come from tanker waste according to one army engineer who was in the county recently.

This Looking Back feature on Paso Robles history comes from one of the hundreds of local newspapers in the Paso Robles Area Historical Society collection. Several local newspapers, dating from the 1800s, have reported on local, national, and world events, providing priceless historical views of our community that are not available from any other source. The historical society is seeking community support for the multi-phased Newspaper Preservation Project to help fund the transfer of these aged and fragile pages to microfilm and digital images. Photography of the old newspapers is by Gigi Greene. News for this column is selected with the assistance of the society’s Vice President Nancy Tweedie and Research Director Jan Cannon. The Paso Robles Historical Society is located in the Paso Robles History Museum at 800 12th Street in Downtown City Park. Visit the Paso Robles Historical Society website for more information about exhibits, research, becoming a member, volunteering, or donating.

Thank you to sponsors of Looking Back:

Golden Anchor Financial Services is committed to helping you find the right mortgage product for your needs. They understand that every borrower is different, and offer a variety of products to meet individual requirements. They make the process of securing a mortgage simple and straightforward by offering you the latest in financial tools that enable you to make sound financial choices. Call them at
(805) 473-7733 on the Central Coast or (559) 473-7733 in the Central Valley.

1800 El Pomar is the site of a historic Templeton ranch located just three miles east of town. The property features an iconic, aged redwood barn, 3 story tank house, original farmhouse with an outdoor garden, original water tank structures, and many other original ranch buildings. Set on 20+ acres of vineyards, the 360-degree views of rolling oak-studded hills and surrounding vines are a photographer’s dream. A prime ceremony location exists in the vineyards behind the barn between two beautiful oaks. The northwest-facing location creates plenty of shade for your guests in an early to late afternoon setting. A perfect venue with plenty of open space to customize your wedding or event. www.1800elpomar.com

Looking Back is a weekly feature of the Paso Robles Daily News. If you would like to sponsor Looking Back, please call (805) 226-9890 or email Beth@accesspublishing.com.