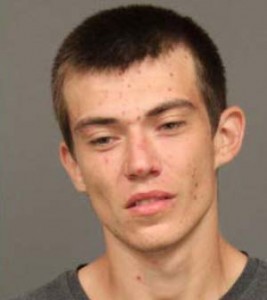 Friday at about 10 a.m., a Paso Robles police officer made a traffic stop on a vehicle in the 3300 block of Park Street for a traffic violation. Upon contact with the driver, Bradleigh Eugene Tabelin of Paso Robles, the officer noticed drug paraphernalia in plain view inside the vehicle, according to a police report.

Tabelin was placed under arrest for a misdemeanor violation of possession of drug paraphernalia. Prior to the vehicle being towed from the scene of the stop, officers discovered a loaded .45 cal semi-automatic handgun beneath the passenger seat. Additionally, officers located heroin and methamphetamine in the vehicle as well. Tabelin was later transported to San Luis Obispo County Jail on several felony charges.

Detectives were called out to assist in the case as there was a recent residential burglary where several firearms were stolen. As detectives inventoried the vehicle’s contents they discovered a second .45 cal handgun in the trunk, along with several boxes of ammunition. Also located within the vehicle was property that was directly linked to at least three other vehicle burglaries that all occurred within the last week.

Approximately 35 items of evidence were seized from the vehicle, all suspected or known to be stolen property. The investigation is ongoing as Detectives are processing the evidence in order to determine the rightful owners of the property.