Man arrested for possession of hashish and cocaine 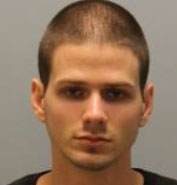 On July 5, 2014 at about 9 p.m., Paso Robles police detectives responded to possible narcotic activity in the 100 block of Niblick Rd. They contacted Chase Joseph Lojacono who appeared to be engaged in possible hand-to-hand exchange of narcotics, according to a report from police.

Upon contact with Lojacono, he admitted to being in possession of concentrated cannabis, or hashish, the report says. During a search of Lojacono and his vehicle, detectives located 1.4 grams of hashish, and .5 grams of cocaine, police report. Lojacono was arrested and transported to San Luis Obispo County Jail for the following:

The Paso Robles Police Department encourages anyone with information regarding criminal activity in Paso Robles to contact Crime Stoppers at (805) 549-STOP (549-7867) or submit a Web Tip from the Crime Stoppers website at http://www.slotips.org. You can also submit a “Text Tip” by texting “slotips” and your message to CRIMES (or 274637). You may also contact the Special Enforcement Team (SET) directly at (805) 237-6464. You do not have to give your name.