Man convicted for aggravated mayhem, assault with a knife 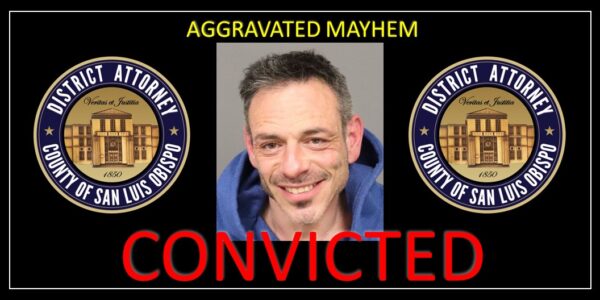 The jury also found that Hernandez personally inflicted great bodily injury on the victim during the knife assault. Finally, jurors made additional findings that nine factors in aggravation were true. The findings include: the attack was violent and indicates a serious danger to society; Hernandez’s prior convictions are numerous and of increasing seriousness; that he has served a prior prison term; and that he was lying in wait when he attacked his victim.

During the trial, jurors heard evidence that shortly after 1 a.m. on Jan. 24, 2022, Hernandez attacked the male victim with a knife, severely slicing his face from his hairline to his lower jaw, inflecting an injury that required extensive reconstructive surgery to repair. The assault occurred in the 200 block of Five Cities Drive in Pismo Beach.

“This vicious and senseless crime will result in the permanent disfigurement of the victim and very well could have ended his life,” said San Luis Obispo County District Attorney Dan Dow. “Individuals committing violent crimes in our community will be met by aggressive prosecution and personal accountability.”

A sentencing hearing is scheduled for July 28, 2022, at 8:30 a.m. in Department 7 of the San Luis Obispo County Superior Court, with the Honorable Judge Timothy S. Covello presiding. Hernandez faces a potential sentence of life in prison for his crimes.