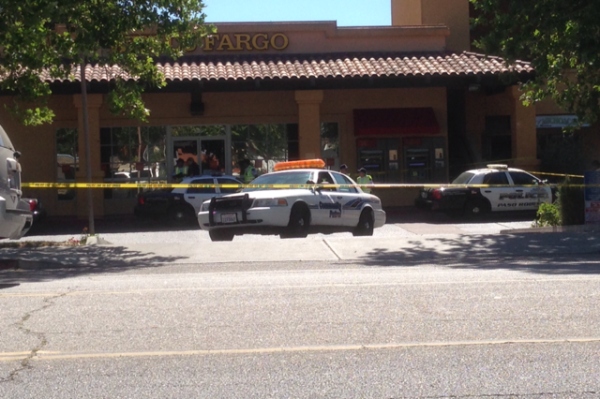 The scene at Wells Fargo Bank on Spring Street in Paso Robles at 10 a.m.

A male subject entered Wells Fargo bank on 6th Street in Paso Robles at approximately 9:15 AM this morning, Tuesday, June 18, 2013. The suspect had a handgun and was last seen leaving the bank east bound on 6th street in a vehicle. 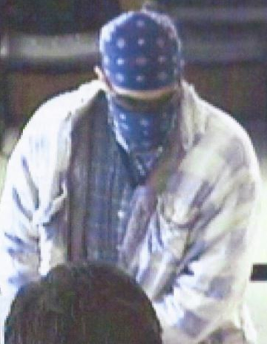 Still image of the suspect from surveillance video

The suspect fled the area in an older model Ford Explorer, maroon or burgundy in color, with a slight lift and oversize off-road style tires. The vehicle also had a factory luggage rack on the roof and a tinted rear window. A partial license plate was obtained: 4JXS or 4JX5. This vehicle was last seen headed eastbound on 6th Street away from the scene.

Police advise the public that if suspect or vehicle is seen, do not approach, use caution and call 911 or your local law enforcement agency.

A police helicopter is circling the area around the bank. Police have the parking lot at the 500 block of Spring Street closed with yellow tape. A KSBY News van is on site and reporting live.

At about 9:20 a.m. the Paso Robles Police Department received multiple 9-1-1 calls regarding an armed robbery in progress at the Wells Fargo Bank located at 546 Spring Street.

The reporting parties stated a suspect entered the bank armed with a semi-automatic handgun. Witnesses reported that the suspect committed the robbery and fled the scene prior to the arrival of PRPD officers.

There were no injuries during this incident and the loss is still being determined. Attempts to locate the suspect in the area met with negative results. The Atascadero Police Department and California Highway Patrol assisted with those efforts.

The PRPD is seeking assistance from the public to help solve this crime. If you have any information about this crime or any person(s) involved, you are urged to call Crime Stoppers at (805) 549-STOP (549-7867) or submit a Web Tip from the Crime Stoppers website at http://www.slotips.org. You can also submit a “TEXT TIP” by texting “slotips” and your message to CRIMES (or 274637). You do not have to give your name. Crime Stoppers will pay a cash reward of up to $1000 for information leading to arrest and conviction, and you can remain anonymous.